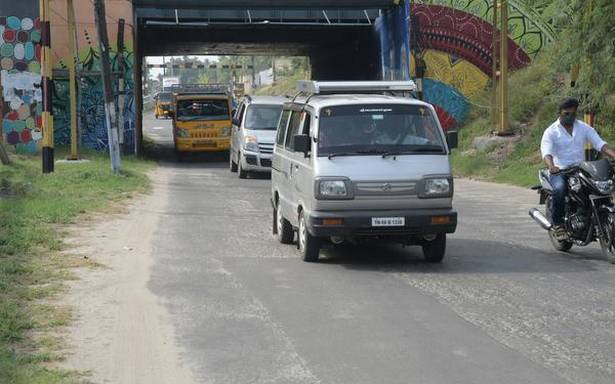 With vehicles finding it difficult to use the 89-year-old road underbridge (RUB) near Kalaimadu Silai, Erode MP A. Ganeshamurthi has urged the Railways to widen the subway to meet the growing vehicular population.

The RUB was constructed in 1932 with a height of 3.5 m and width of 6 m on the Erode – Dharapuram and Erode – Karur Road near the Railway Colony. It is the key entry point for vehicles coming from Karur, Muthur and Poondurai areas. With increase in population and the expansion of the city and its outskirts, the subway failed to meet the vehicle population and another subway was constructed near it during 1996.

Due to low height, heavy vehicles cannot ply through the RUB and hence there is a long demand from the public to widen the RUB. Also, expansion of the city demands widening the RUB to ensure vehicles flow without hindrance.

The MP recently met Ashwini Vaishnaw, Minister for Railways, in New Delhi and presented a petition urging the Railways to reconstruct the existing RUB at the earliest. He said that the RUB located on State Highways 83A is significant as the road connects with other southern districts. He said that the bridge was constructed then to cater to the requirements to accommodate road traffic that prevailed 89 years ago. “But now, the city has grown and road connectivity plays an important role in development”, he said and urged the Minister to take necessary action.

The MP said that the Minister had assured to direct the railway officials concerned to coordinate with the Chief Engineer of the State Highways for carrying out a study.