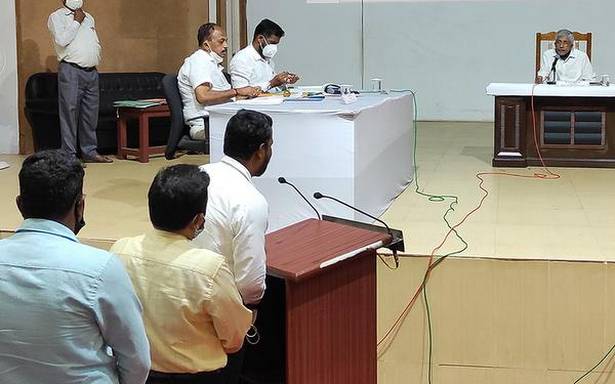 Leaders representing Mukhari/Muvari and Nair communities in the State on Tuesday urged the Karnataka State Permanent Backward Classes Commission to include them in the backward classes’ list to improve their social and economic conditions.

The demands were made at the public hearing of grievances of different communities regarding their inclusion in the list by the Karnataka State Permanent Backward Classes Commission chaired by K. Jayaprakash Hegde in Udupi.

Shankari Mukhari Patredi Mane, president, Mukhari Samaja Sangha, and A. Balakrishna, advisor, Mukhari/Muvari Samudaya Sangha, told the commission that the people of the community reside in large numbers in Puttur and Sullia taluks of Dakshina Kannada and Kodagu districts. However, they were not included in any of the backward classes list thereby being deprived of the benefits in education, employment and other fields. The community was identified as a backward class in Kerala, they said.

On the occasion, H. Murali, president, Karnataka Nair Service Society, and other leaders from the community told the commission that over 15 lakh people belonging to Nair community from Kerala, reside in Karnataka. They were not identified in any category in Karnataka and as such were not able to get benefits. The Nair community should be listed in the BC list making suitable provisions for reservation, they demanded. The chairperson promised suitable action.

Karnataka State Kulala Kumbara Associations Federation district president Sunil and other community members urged the commission to provide internal reservation for the Kumbara/Kulala community that was included in Category 2 of BC list. Besides including pottery as a profession in skill development programme, community members should be given enhanced training and a separate development board — Kumbhakala Abhivriddhi Mandali — should be formed for the community, they demanded.

Mr. Hegde said their demands would be submitted to the government for necessary action.