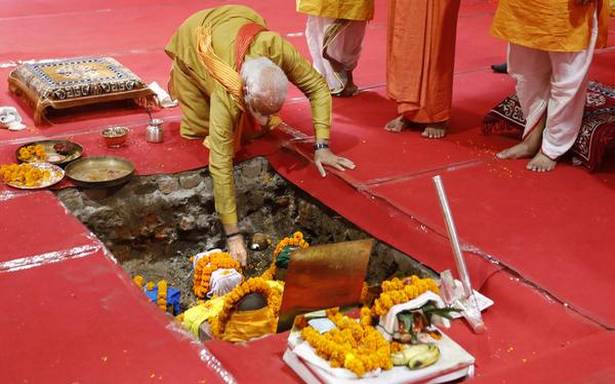 I want to foster communal amity between Muslims and Hindus, says W.S. Habib

In a gesture aimed at communal amity, a Muslim businessman from the city has donated ₹1 lakh towards the construction of the Ram Temple at Ayodhya, as voluntary contribution from devotees in Tamil Nadu for the shrine in Uttar Pradesh has been growing.

Daily wage earners like cobblers and small traders are among those making contributions to help raise the proposed magnificent structure.

With the Shri Ram Janmbhoomi Teerth Kshetra (SRJTK), set up by the Centre to construct the temple, coming out with donation coupons of ₹10, 100 and ₹1,000, a large number of people came forward to donate, said S V Srinivasan, VHP state organising secretary who is involved in raising funds for the temple.

"All those whom we approached have been generous in donating for the noble cause," he added.

And when the members of the Hindu Munnani, accompaniedby the volunteers from the SRJTK approached him, W.S. Habib gifted a cheque for ₹1,00,008, taking the fund raisers by surprise.

"I want to foster communal amity between Muslims and Hindus.We are all children of god.I donated the sum with this belief," Mr. Habib, a property developer, said.

He said he was pained to see Muslims being painted as anti-Hindus or anti-India by some sections.

Pointing out that there was nothing wrong in donating for a good cause, Mr. Habib remarked, "I wouldnt have donated to any other temple but the Ram temple is different as decades-old Ayodhya dispute came to an end." The Hindu Munnani, which is also involved in the campaign, said road shows are being held in various parts of the state to raise funds.

"All those whom we approached willingly donated. A gentleman who suddenly emerged from the crowd presented a cheque for ₹50,000.The response from Ram bhakts is overwhelming," A T Elangovan, Hindu Munnani’s Chennai president, said.

According to K E Srinivasan, Chennai organiser of Dharma Jagran Manch a wing of RSS not only the affluent in the society but also the poor contributed.

"At Perambur, for instance, cobblers and other sections came forward to donate ₹10," he said.

At Kodungaiyur when the members solicited funds for the temple construction, shop keepers contributed their mite.

An enthusiastic seller of vermilion (kumkum) near a temple, who happened to be a Muslim, gave ₹ 200 for the cause.

The Kanchi Kamakoti Peetam has already appealed to the devotees to donate liberally.

Janakalyan, a spiritual and cultural service organisation, is utilising its office with several prominent personalities to contribute towards the initiative, its city secretary V Subramanian said.

The Supreme Court in November 2019 settled the decades-old dispute and paved the way for the construction of a Ram Temple by a Trust at the disputed site at Ayodhya.

It had then directed the Centre to allot an alternative 5-acre plot to the Sunni Waqf Board for building a new mosque at a "prominent" place in the holy town in UP.

Prime Minister Narendra Modi had on August 5, 2020 laid the foundation stone for the construction of a grand temple at Ayodhya.