Sharmila Tagore on Soumitra Chatterjee: The basis of our friendship was his persona, his values, just the inimitable way he was. There was so much to learn from him, he leaves behind a rich legacy. 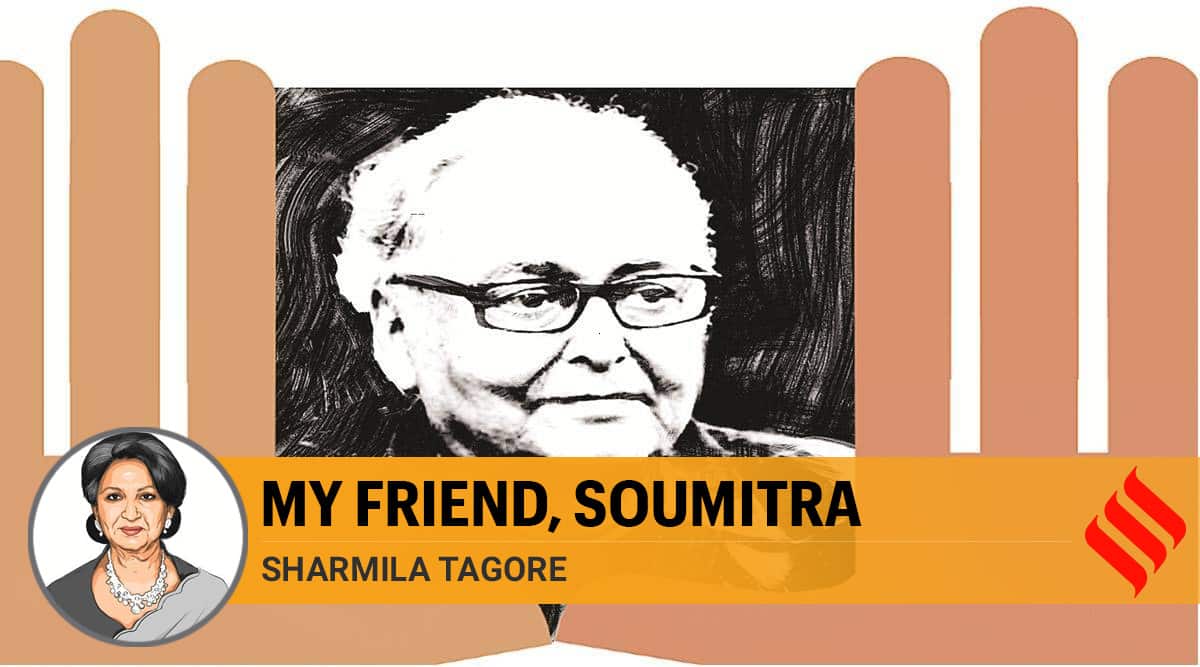 Although I knew for some time that Soumitra was in Belle Vue’s intensive care and in a critical state, I was not prepared for the finality of the moment when the message flashed on my phone screen: “Soumitra da is no more”. Since then I have been trying to make sense of this overwhelming feeling of loss.

Meanwhile, the phones continue to ring incessantly — news media asking for my reaction. Understandably. Apur Sansar with its unforgettable onscreen romance of Apu and Aparna captured the collective imagination of both the Bengals and somewhere over the years the lines were blurred. You cannot think of Apu without Aparna. In the film, Aparna dies during childbirth, but in life Apu has preceded Aparna.

When you grieve you are not always coherent, but in the life of “news”, immediacy is everything.

Today, not just in news, there is a rush everywhere. Everyone is in a hurry. How do we place “friendship” against this backdrop? Whilst working on a film one develops such close friendships and after the film is over everyone moves on to the next project. Friendships slowly fade. Our busy schedules do not support friendships. But the “Soumitra-Sharmila friendship” endured. 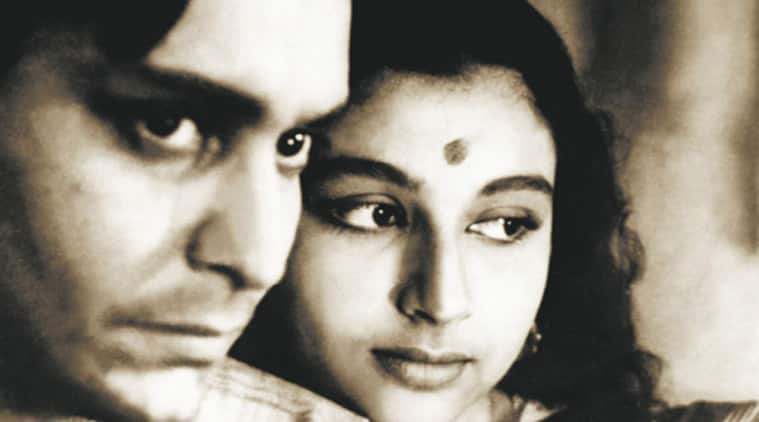 Apur Sansar was our first film. I was 13 and Soumitra was 23. I was the youngest in the unit so Satyajit Ray became Manik da, sound recordist Durga da, DOP became Subrata kaku but Soumitra Chatterjee remained Soumitra — a friend. Someone with whom I could chat, with whom I felt equal (later I realised that Soumitra had this unique quality to attune himself with everyone).

The outdoor shooting of Days and Nights in the Forest remains so vivid in my memory. We spent a month in Chhipadohar, a small forest town in the Palamau region of Bihar. The month was April, the temperature spiked to almost 48 degrees Celsius during the day. We worked for about three hours early morning and then three again in the early evening. The rest of the time it was just “adda”. Sometimes Manik da would drop in to join us until he realised that everyone was hiding their cigarettes and becoming overly respectful. Robi da had added an epithet to everyone’s name. Robi Pora (burnt), Shamit Bhapa (steamed) Subhendu Bhaja (fried) etc. I was the only one who had a room with a cooler — the prerogative of being a woman — and I never heard the end of it.

Nearer the full moon nights, the forest became magical. We could hear the trumpeting of the faraway elephants and the intoxicating rhythms of the Santhal drums. I remember once, all of us, on a whim, went to meet the Santhals and danced with them till late into the night. Manik Da never got to know. One evening, some rough characters came to where I was staying and created quite a nuisance. We were far away from the police posts and those days no one had bodyguards. But Soumitra and the other boys managed to chase them away — by no means an ordinary feat. I knew then that I was amongst people who cared for me deeply.

Sadly, so many of them have passed on. Kaberi di, Robi Da, Subhendu, Shamit, Bansi da, Manik da and now Soumitra. No one is left to recollect the joy and exhilaration of those days and nights we spent together in that age-old forest under the vast limpid sky of Chhipadohar. I brought back a bottle of mahua as a keepsake but the odour was all too much for the other occupants of the house and ultimately I had to get rid of it. 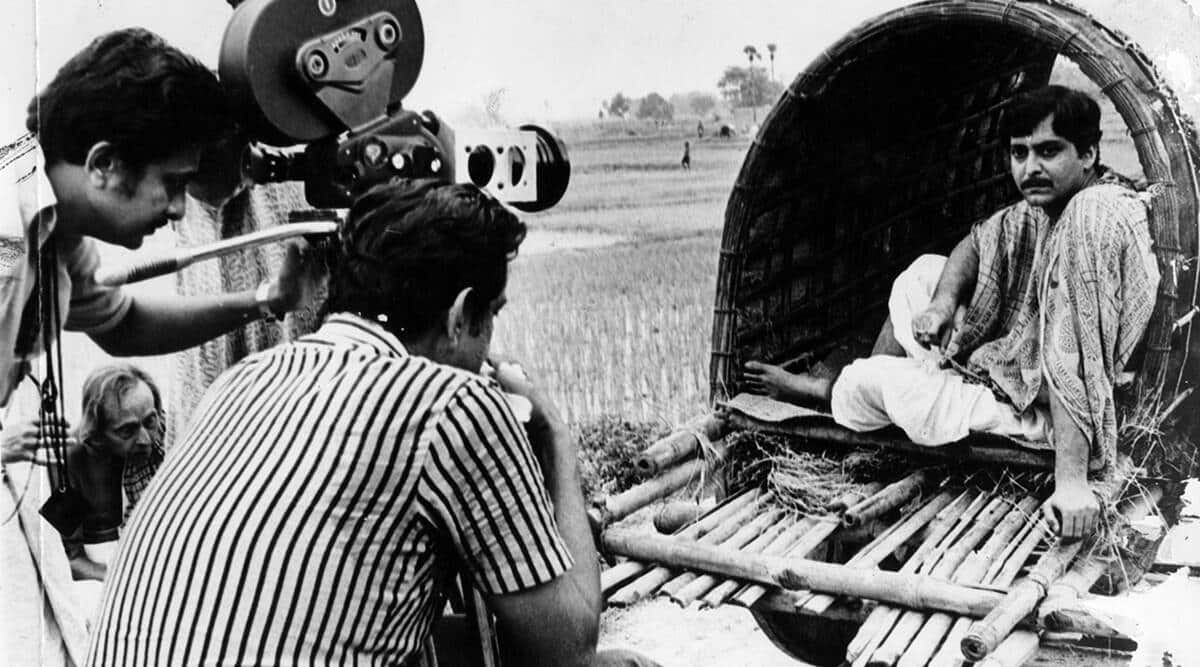 Another such outdoor shoot was Goutam Ghose’s Abar Aranye. Subhendu, Soumitra and I shared a three-bedroom dak bungalow complete with cooks and bearers in the middle of a tea estate. The old-world ambience suited us, its new occupants. We re-arranged our rooms, swapping furniture with each other. Mostly, I got my way.

We had to wake up at the crack of dawn for the shoot but whilst I would still be in bed sipping coffee, Soumitra would have already been for his morning walk and Subhendu would be busy giving breakfast and dinner instructions to the bearer. I could hear Soumitra singing in the verandah as he did his morning workout. It was so blissful. Then a flurry of activity and a long drive to location. Soumitra in between work would scribble on little scraps of paper and read them out to me — lovely poems for his grandchildren — and then wait eagerly for my feedback. The look on his face was so childlike and his smile impish. The thought of his family would always light up his face.

The day’s work behind us, we would gather in the sitting room chatting. I wish I had recorded those conversations. There was so much to learn from him. I was mostly a silent listener as the two “Ss” carried on, flitting from one subject to another — theatre, art, sports, politics, philosophy, gossip. Soumitra truly was a Renaissance man. Hours passed and much too soon it was time to have dinner and get ready for the next day.

The basis of our friendship was his persona, his values, just the inimitable way he was. His charm, his humour, his immense scholarship, his attention to every facet of his being. Post Charulata, he worked on his handwriting till it met his standard of perfection. He was not driven by commercial considerations. He remained steadfastly committed to his ideology and loyal to his friends. He firmly believed in his vision of India which matched my own. People like him are becoming increasingly rare.

On the evening of November 15, Kolkata bid him a heart-warming farewell with poetry, flowers, songs and tears. He was deeply rooted in Bengal and Kolkata was his chosen city. His work was intimately tied to the city so it is no wonder that Bengal was devastated. I don’t think Soumitra can ever be yesterday’s news. His body of definitive work, his soul-stirring recitations, in short his legacy, will continue to inspire and enlighten many more generations to come. The very ordinariness and accessibility of Soumitra added to his charisma. He was modesty personified.

If there is any regret I have it is that the legacy of Soumitra, like his mentor Satyajit Ray, is better known as part of world cinema than Indian cinema. Sadly, many outside of the two Bengals are not aware of his contribution unless they were students of cinema or somehow connected with filmmaking.

When a friend reached out to Soumitra for a surprise film she was making for my 75th birthday, despite being very unwell, he made time. In fact, he said “you cannot do the film without me. I want to be part of Rinku’s special birthday.” What he said I will always cherish: “Ours is a spontaneous and organic bond. Even when we meet after months, it seems like only yesterday. We simply start from where we left.”

He was my friend of 60 years. For me his passing has been a huge personal loss. I will always remember him in those famous words of Tagore:
Jibon moroner seemana charaye
Bondhu he aamar royeche daraye
(Beyond the arena of life and death/
O my friend, you remain standing)

The writer, an actor, made her debut in Apur Sansar with Soumitra Chatterjee.