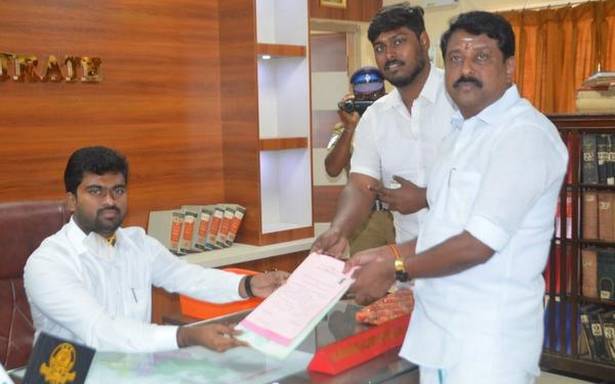 Even before the party high command released the list of candidates to be fielded in 20 Assembly segments in Tamil Nadu, BJP state vice-president Nainar Nagenthran filed his nomination for Tirunelveli Assembly segment on Friday.

When asked about his filing of nomination even before the list of candidates was released by his party, Mr. Nagenthran, said he had filed the papers as today was an auspicious day (new moon day).

He exuded confidence over winning the wholehearted support of the AIADMK, which was hopeful of fielding its candidate in Tirunelveli constituency. Interestingly, none of the AIADMK office-bearers here accompanied Mr. Nagenthran while he filed the nomination.

When he entered electoral battle in 2001, he was elected to the Assembly from Tirunelveli constituency and went on to find a place in the Cabinet led by Jayalalithaa to serve in the transport, electricity and industries portfolios. However, he lost the election in the same constituency to DMK’s N. Maalairaja in 2006 and got elected again in 2011. He tasted defeat in 2016 as he lost the battle of ballots to DMK’s A.L.S. Lakshmanan by a narrow margin.

On joining the BJP, he was fielded in Ramanathapuram Lok Sabha segment where he lost the election to Navas Kani.

Interestingly, Mr. Nagenthran has to face Mr. Lakshmanan again this time too in Tirunelveli.