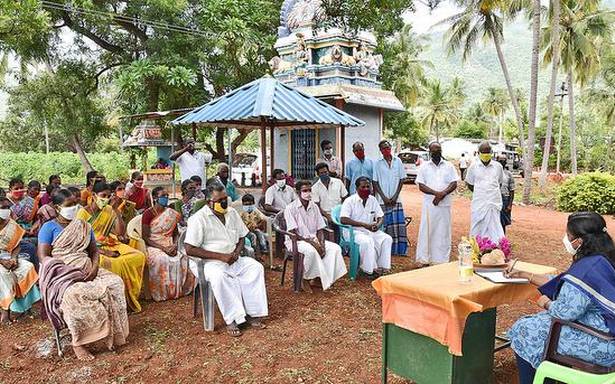 The long standing demand of Adukanpudhukombai villagers is finally getting fulfilled with the beginning of works for laying a road to the village.

Located at the foothills of Kolli Hills, Adukanpudhukombai is on the Tiruchi-Namakkal border. While the habitation falls in Namakkal district, the forest range falls under Tiruchi Forest Division and it has always been a tricky situation for the villagers. While the habitation has access to basic amenities, the villagers have to trek through the forest range to access main roads in Tiruchi as there is no connectivity with Namakkal side.

The villagers said they had to stay indoors after dusk due to lack of proper road and light facilities.

In case of emergencies, the villagers would have to trek down with the help of a torchlight through the forest. The need for a road got delayed due to administrative issues.

Ms. Singh said, “discussions were held with the Tiruchi Collector and he too responded positively. Road has to be laid for 1.62 km of which 1.14 kms passes through the forests. The works have begun and are expected to be completed within a month. The road will be developed into a tar road later.”

She added that street lights would be provided to the stretch, and it would provide easy access to the villagers with Tiruchi district once completed.

The district administration also arranged for providing nutritious food for pregnant women and 13 children from an anganwadi centre in Tiruchi district. Earlier, these families had to depend on the anganwadi centre in Pallikattupatti in Namakkal that was 20 km away.