‘No other leader in our history, or that of our neighbours, has been able to produce anything of the quality that Nehru did,’ says Aakar Patel. 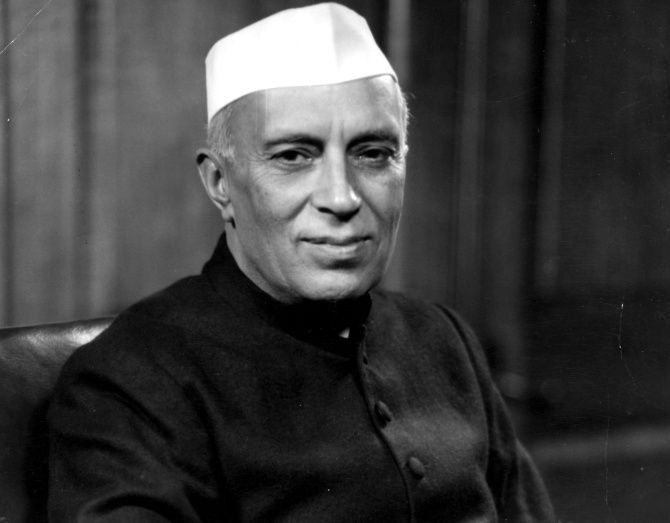 Somewhere in the Selected Works of Jawaharlal Nehru (which, believe it or not, still haven’t been fully brought out, the latest one being around 1961 or ’62 or so) is a letter about classical music.

Nehru is writing to someone in government, referring to a letter a man from Bombay has sent him.

Nehru writes that his correspondent, a Parsi man, is distressed over the decline of Western classical music in India.

Nehru agrees with that assessment and writes that something must be done about it.

On a visit to London a few years ago, I saw an exhibition on the modern American designers Charles and Ray Eames.

They came to India in 1958 on Nehru’s invitation and this in turn helped set up the National Institute of Design in Ahmedabad.

There is a reference in their report on how the lota (I think they mean the larger ghada) has the perfect shape, with rounded bottom and the waist making it easier to cart around.

The Eames wrote in their India Report the following: ‘Of all the objects we have seen and admired during our visit to India, the lota, that simple vessel of everyday use, stands out as perhaps the greatest, the most beautiful. The village women have a process which, with the use of tamarind and ash, each day turns this brass into gold.’

But how would one go about designing a lota? First one would have to shut out all preconceived ideas on the subject and then begin to consider factor after factor:

The optimum amount of liquid to be fetched, carried, poured and stored in a prescribed set of circumstances.

Of course, no one man could have possibly designed the Lota.

The number of combinations of factors to be considered gets to be astronomical — no one man designed the lota but many men over many generations.

Many individuals represented in their own way through something they may have added or may have removed or through some quality of which they were particularly aware.

The hope for and the reason for such an institute as we describe is that it will hasten the production of the “Lotas” of our time.

By this we mean a hope that an attitude be generated that will appraise and solve the problems of our coming times with the same tremendous service, dignity and love that the Lota served its time.”

We should look at two questions here: first, how many of us look at India and its objects with these eyes? Two, which political leader have we had after Nehru who aspires to such things?

I will leave it to you to answer both after reflection.

My point is that there was an interest from India’s leadership in that period in our own culture.

Nehru is caricatured as a failed Socialist who wrecked the Indian economy (this is false, but we will leave that for another day).

However, it is but rarely that his elegant and civilising side is appraised.

The Sahitya Akademi was formed in 1954 as a national organisation to ‘work actively for the development of Indian letters and to set high literary standards, to foster and co-ordinate literary activities in all the Indian languages and to promote through them all the cultural unity of the country.’

The Sangeet Natak Akademi was set up in 1952.

In 1957, a full decade after Partition, Nehru convinced Ustad Bade Ghulam Ali Khan to move to India from Pakistan.

Mind you, the Ustad was born in Kasur, which is Pakistan Punjab and so was moving away from his ancestral home.

This move helped keep the greatest exponent of our tradition in India and pass on his learning.

Forget the IITs and IIMs and other such things.

No other leader, mind you, in our history or that of our neighbours has been able to produce anything of that quality and it’s not been a short time since Nehru departed.

What is being referred to here specifically is tradition and culture.

I am not being chauvinistic or parochial in saying that Indians (I should say South Asians) possess one of the richest cultures on the planet.

But how much interest has this government taken in the promotion or discovery or development of this?

When he moved to Dewas in Madhya Pradesh to recover from tuberculosis, Pandit Kumar Gandharva documented the tribal and folk poetry of MP and then set it to music.

How much other such material remains undiscovered in our time? Forget any other place, what have we done to preserve the art of Varanasi’s sari weavers or the makers of its fantastic dessert malaiyyo?

I wonder when it will be that our aggressive nationalism will be defined as love for the things that this country actually produces and stands for, rather than a dislike of someone or something else.