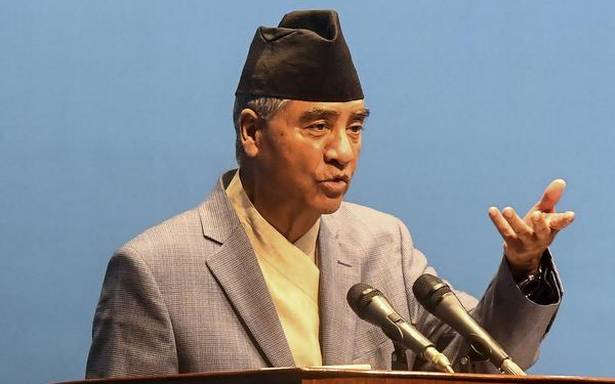 It begins on January 10 with focus on business collaborations

Prime Minister of Nepal Sher Bahadur Deuba is likely to attend the annual Vibrant Gujarat Summit in January, diplomatic sources in Kathmandu have said. Mr. Deuba, who was re-elected to the presidency of the ruling Nepali Congress party on December 15, replaced Prime Minister K P Sharma Oli in last July.

The Ministry of External Affairs here had earlier announced that the summit to begin on January 10 will have a large segment where the focus will be on business and collaboration with foreign countries. Though the Russian Far East is expected to be in focus, Sri Lanka, Denmark and Canada will also be promoted during the event.

India had been observing the internal elections of the Nepali Congress. It was understood that high-level visits between the two sides would take place after Mr. Deuba consolidates his position as the Prime Minister and the president of his party.

Nepal is likely to go into election mode in spring with local polls followed by general elections. The elections are expected to be fought tightly between Mr. Deuba-led coalition which also has former Prime Ministers Madhav Kumar Nepal and Pushpa Kamal Dahal Prachanda. It is facing a tough challenge from Mr. Sharma Oli.

India and Nepal however have established communication at the highest level following Prime Minister Narendra Modi’s meeting with Mr. Deuba on the sidelines of the COP26 summit in Glasgow where the latter announced that Nepal will attain carbon negative status by 2045.

Kathmandu will require at least $46 billion from the international community to attain its goal between 2022-2030.