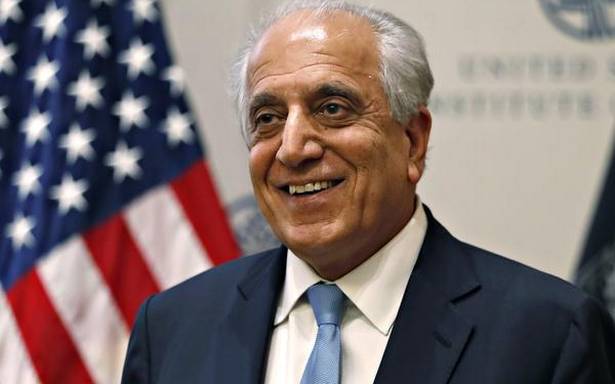 The inclusion of India in the United States’s latest strategy for regional talks on Afghanistan is welcome but it does not remove several misgivings New Delhi has about American policy over the conflict that was revealed over the weekend during U.S. Special Envoy Zalmay Khalilzad’s talks with External Affairs Minister S. Jaishankar and a letter written by U.S. Secretary of State Anthony Blinken to Afghanistan President Ashraf Ghani, sources said.

During the call, Mr. Khalilzad is understood to have apprised Mr. Jaishankar of Mr. Blinken’s missive, after which he travelled to Islamabad for meetings with Pakistan’s Army Chief General Qamar Bajwa, where he “thanked Pakistani counterparts for their assistance and asked for Pakistan’s continued commitment to the peace process,” U.S. State Department spokesperson Ned Price said, outlining the U.S.’s regional efforts.

According to the letter to Mr. Ghani, which was published by Afghan agency Tolo News (https://tolonews.com/pdf/02.pdf), and has not been denied by the U.S. or Afghan governments, Mr. Blinken’s plan is to ask the United Nations to convene a meeting of “Foreign Ministers and Special Envoys from Russia, China, Pakistan, Iran, India and the U.S.” to discuss a “unified approach” on Afghanistan.

For New Delhi, which has protested being left out of regional formulations in the past both in the original Moscow process, and in the United Nation’s April 2020 “6+2+1” that included Afghanistan’s “immediate neighbours” only, the U.S.’s suggestion is a relief. Even so, experts question what such a group would achieve.

“It seems the U.S. just wants to accelerate its exit from the conflict by proposing this grouping at the U.N. It is a mystery what the U.S. expects to discuss around a table with China, Russia, Iran and Pakistan, all of which it is otherwise at odds with, and is seeking to contain or sanction. How will it help India?” asked Kabir Taneja, Fellow at the Observer Research Foundation.

Equally puzzling is the U.S.’s plan to ask the government of Turkey to host a senior-level meeting of “both sides in the coming weeks to finalise a peace agreement.” Officials said the new emphasis for an Istanbul process over the current process in Doha, might indicate a greater role for Turkey, as well as Turkish troops as a part of a proposed “NATO stabilisation force”, something that New Delhi might have concerns about, given close ties between Turkey and Pakistan.

Other parts of the Blinken letter and the Afghan policy proposals that have been outlined in Mr. Khalilzad’s conversations could also be a source for concerns, some of which would be raised during the upcoming visit of U.S. Defence Secretary Lloyd Austin to Delhi next week, although it is unclear whether the first Quad summit, including U.S. President Joe Biden and Prime Minister Narendra Modi, expected to be held on Friday March 12, will cover the U.S.’s latest moves in Afghanistan.

For example, the U.S. has pushed for a roadmap to a “new, inclusive government” in Kabul, which indicates its desire to replace Mr. Ghani’s government with an interim government that would include the Taliban’s nominees. In the letter, Mr. Blinken asks Mr. Ghani to “build consensus” for talks with the Taliban about governance and power-sharing.

“There seems to be a certain inevitability in these proposals for Afghanistan, which suggests that the U.S. has already decided that the Taliban has a legitimate place in Kabul,” an official told The Hindu.

The new American roadmap was criticised by a former senior Trump administration official as well.

“Unless the Taliban agrees to a comprehensive ceasefire first, throwing out the democratic set-up in favour of an interim government would only facilitate the Taliban’s goal of delegitimising the Afghan state and making it easier for the Taliban to topple the state militarily,” said Lisa Curtis, former National Security Council Director, now at the Centre for a New American Security.

In addition, said experts, the U.S.’s outlined discussions on a “negotiated settlement and ceasefire” don’t include a reference to democratic principles, the elected government, or the rights of women and minorities, something New Delhi, with major stakes in Afghanistan’s development and infrastructure, has always emphasised.

A diplomatic source also pointed out that Mr. Blinken letter’s tenor with Mr. Ghani, a Head of State, was out of step with protocol. In the letter, Mr. Blinken asked Mr. Ghani to “understand the urgency of my tone” as he virtually threatens that the U.S. is “considering the full withdrawal of forces by May 1st,” as it considers other options. India, which has never publicly opened talks with the Taliban, has remained hopeful that the U.S. will retain some forces in Afghanistan in order to ensure leverage and interest in the reconciliation process.