Misinformation through social media and a widening lack of trust in the government has meant Dalits are trusting local quacks over state-run health facilities in these villages near Ghaziabad. 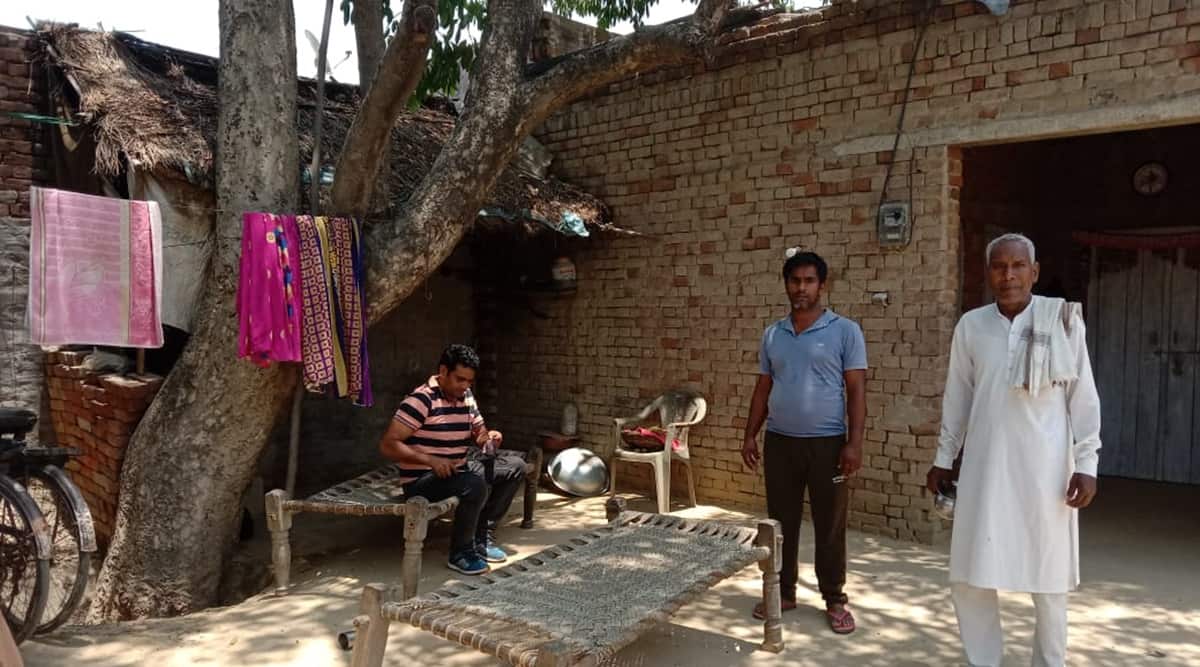 In Uttar Pradesh’s Domatikri village, four people have died since April: a woman in her seventies, a man in his sixties, and two brothers in their forties. All of them had high fever before they succumbed. Villagers, however, don’t know if they had Covid-19 – they were never tested. Also, they all died at home, with only the two brothers visiting a hospital during the course of their illness.

“There is hesitancy about getting tested. No one knows how accurately the tests are conducted, there are so many reports of mistakes. They might bundle healthy people off to the hospital. And if you go to a hospital, you are most definitely not coming back,” says Dharmvir Singh Gautam, a village resident in his fifties, who also goes by the title of ‘Netaji’.

No one in the village, except government employees, has got vaccines, nor do they intend to.

Gautam gets his misgivings from the videos he has been watching on social media. Over the past month or so, there has been a flood of posts about hospitals stealing people’s kidneys or eyes, or letting people die because of obscure uses the body would be put to.

“I saw this video, a man was saying that his brother was only mildly unwell when he went to the hospital, but two days later his body was returned with kidneys missing. In another video, a doctor snatches a crying child from a woman, puts the machine used to give steam on his mouth, and the child dies. So no, no way I am going near a hospital,” Gautam declares.

Has a government official visited their village to talk about Covid-19? Have they been told about the need for social distancing, sanitising or wearing masks?

“We know all that from TV and newspapers. No government official has come to talk to us. Just before panchayat elections, a testing team did come, and said 14-15 people had tested positive. They were not given any treatment. They are all fine now.”

Domatikri is located about 36 km from Ghaziabad, with around 200 families, mostly belonging to Scheduled Castes such as Jatavas, Valmikis, and Prajapatis. The village meets many standards of development – pucca houses, paved roads, people employed in agriculture or in the cities nearby, several owning smartphones.

The exposure and the internet access has ensured a flood of misinformation about Covid-19, worsened by a trust deficit in the government — and no outreach from the state to address either.

Narendra Kumar, a lawyer and brother-in-law of the last village pradhan, says the pradhan and ASHA workers try to counter the misinformation, but have not been successful. “An ASHA didi is not enough to counter what people think they have seen with their own eyes in the videos. We need a sufficiently important voice, trusted by the people, to talk to them. But there is no such figure. Our MP is General VK Singh, he has never even been seen in the area. No minister or leader has tried to spread awareness about Covid. We are a small village with a large SC population. Since 2016, we are trying to get three handpumps sanctioned. That should tell you how prominently we figure in this government’s list of concerns.”

Narendra says people have good reasons to not trust government facilities. “During panchayat elections, the rules said only those with Covid negative certificates could enter counting rooms. So people paid Rs 500 to Rs 1,000 at the health centre and got negative reports without tests.”

In April, villagers say, around 40 people here were running a fever. There is one government health centre in the area that caters to about 35 villages. But people did not go to that centre. They went to “local doctors” – people with no medical degree who have “learnt the job” from other doctors, as explained by Gautam. These men prescribed paracetamol and other allopathic drugs, and everyone recovered. Meanwhile, they consumed kadhas (herbal concoctions) to build strength.

They know more people than usual are dying, but very few of those who died were tested.

“Last month, my cousin who lived in nearby Samana village died. We took her to the Hindon ghat for cremation, but had to wait because the ghat was crowded. This had never happened. My sister died of pneumonia probably,” Gautam says.

Conversations around the village present the same story – people fall ill, take drugs from “local doctors”, and recover. Some have lost kin in other villages. But the reason given is “pneumonia”, “low platelets in blood due to fever”, “low blood pressure”, etc. 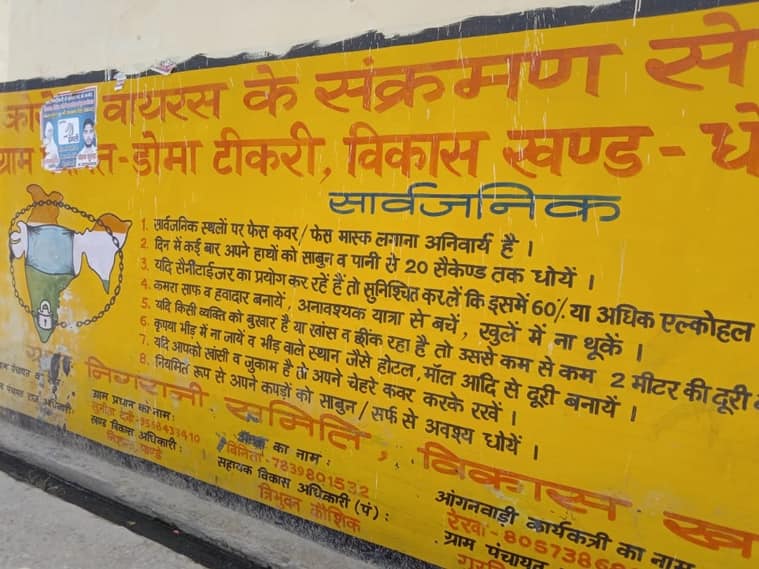 Walls in the village are painted with Covid awareness messages and helpline numbers — the last pradhan did that. But that has not inspired much confidence.

“The only time we had hopes from the government was when Mayawatiji was in power. She used state schemes for our welfare,” says a teenager who belongs to the Jatav community and does not wish to be identified.

“Policemen harass us in the name of the lockdown. They catch us on any pretext – shop open barely minutes into the curfew, someone going somewhere out of a genuine need – and demand money. In government health centres, doctors and attendants speak rudely to us. This was always the case, but has peaked now. And if you complain, you get an FIR on your name,” he adds.

The state government has announced some relief schemes during the pandemic — setting up door-to-door Covid monitoring committees in villages, and Rs 1,000 monthly assistance to registered labourers. 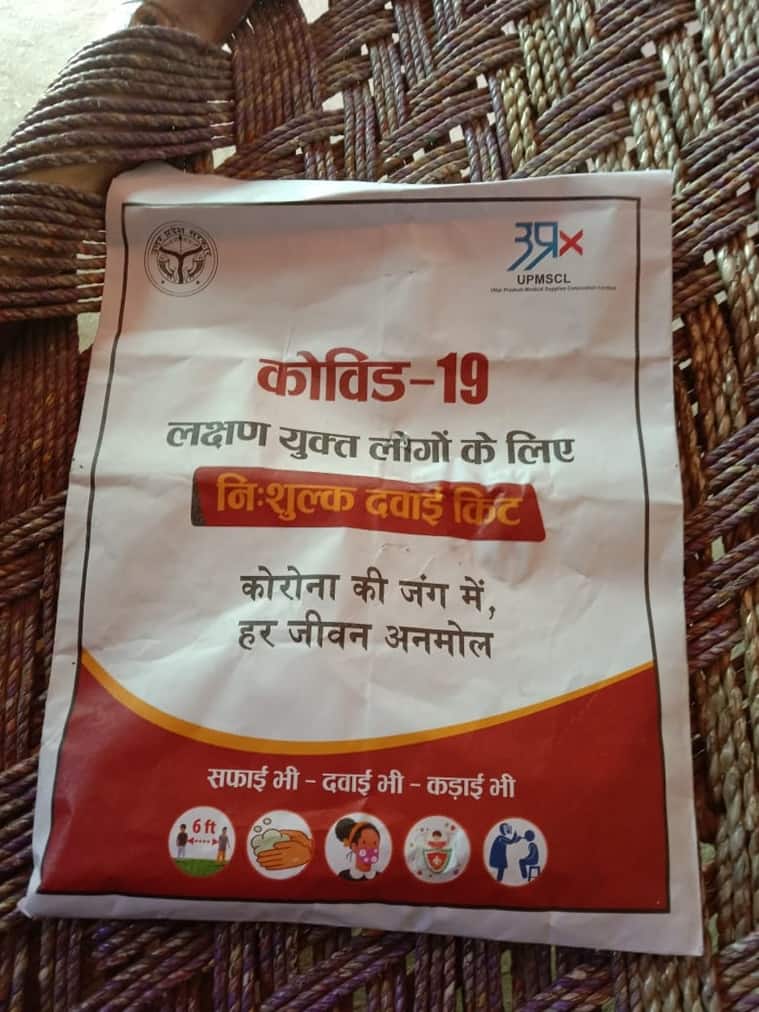 He, however, has recently received an oxyemeter, a thermometer, and kits with medicines like paracetamol and Ivermectin. “They are to be distributed to those in need. Apart from these, the government sends sanitisation vehicles. It came once this month and twice in April. I think labourers received Rs 1,000 for this month, but I will have to check the records,” says the pradhan, Pankaj Kumar.

When asked about his plans to counter the lack of trust in hospitals, Pankaj says the monitoring committee will try, but admits it will be an uphill task.

Ajay, a Ghaziabad-based activist who runs an Ambedkarite organisation called Loktantrik Samajwadi Sangh, has been active in several east UP villages since the first lockdown. He has noticed rising distrust towards hospitals among Dalits in the past two months, fuelled by social media. “Social media is a beast with no head and uncountable arms, so you can’t really say why a certain type of posts have suddenly multiplied. But this distrust is probably serving the government well. There aren’t enough hospitals for villages anyway. Also, with little testing, Covid figures are under control.” Near Domatikri is Siwaya, a village with SC and Rajput population. The videos have been watched in the Dalit lanes here too. In addition, there’s a story doing the rounds: a nearby hospital was vandalised by the family of a deceased patient because his body was returned without kidneys. No one is sure which hospital or family, but has heard the story from someone who knew someone who knew them. “They were Gujjars. And still the hospital stole the man’s kidney. Think of what they will do to Dalits,” says a middle-aged woman not wishing to be named.

Here, a government testing team has visited twice since April. Recently, the pradhan requested people to take the vaccine. But.

The village pradhan, Amit Kumar, says the govt-mandated monitoring committee has been formed here, and they will focus on making people shed their hesitancy about government hospitals.

“It is not like the state-run hospitals have excellent facilities anyway,” says Sumit Kumar, who is in the second year of graduation. “In April, almost every house here had one member with fever. People were scared and ensured social distancing. Three died, two from our side and one Rajput. The Rajput man had gone to the hospital. From our side, one man was of advanced years and the other died due to breathing trouble. He would not have got oxygen support at the nearest hospital either.”

S R Darapuri, a retired IPS officer, Ambedkarite activist and politician, says the lack of healthcare facilities, the lack of trust in the state, and the unscientific attitude towards Covid-19 is a lethal combination, made worse by the government.

“People know of the poor condition of state hospitals. And this government is feared and not trusted. Instead of outreach, it resorts to excessive use of force to get its orders obeyed. In absence of proper guidance, misinformation will flourish. Another factor is that the BJP government, both state and Centre, does not stand for scientific temper. Instead of speaking in one voice about the necessity of proper medical treatment against Covid, we see BJP leaders talk of cow urine, prayers, cow dung, etc. Lack of confidence in the government is harmful in many ways, including its impact on public health,” Darapuri says.