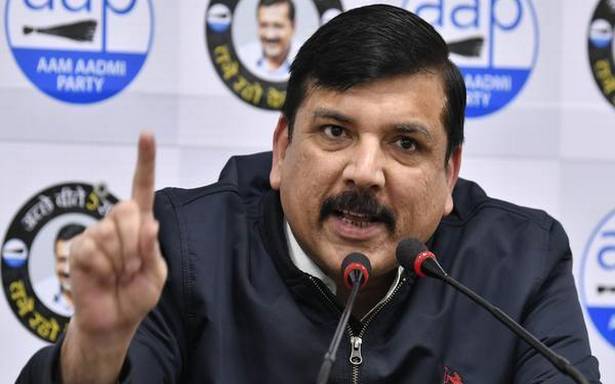 Om Prakash Rajbhar had said that he will meet AAP chief Arvind Kejriwal this week to firm up an alliance for the U.P. Assembly elections next year

There is no talk of an alliance between the Aam Aadmi Party (AAP) and the Suheldev Bharatiya Samaj Party (SBSP), AAP leader Sanjay Singh clarified on July 13 amid reports of a tie-up between the two parties ahead of Assembly polls in Uttar Pradesh next year.

Mr. Singh also accused SBSP chief Om Prakash Rajbhar of lying on July 12 when he said he will meet AAP chief Arvind Kejriwal this week to firm up an alliance for the elections.

“O P Rajbhar ji is lying. No meeting of Kejriwal ji with him has been fixed. Nor is there any talk of alliance with them,” Mr. Singh said on Twitter.

“Whatever news is being published about the meeting of Om Prakash Rajbhar Ji with Arvind Kejriwal Ji is false and baseless…,” the Rajya Sabha MP and AAP U.P. in-charge added.

Mr. Rajbhar had said he would meet Mr. Kejriwal on July 17 in the presence of Mr. Singh. “During the meeting talks will be held to include the AAP in the Bhagidari Sankalp Morcha as an ally,” Mr. Rajbhar said.

The Morcha is a front of small parties led by Mr. Rajbhar.