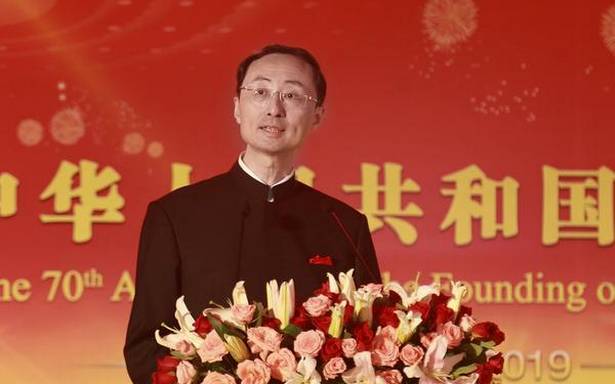 America’s relations with others must not target any specific country, says Sun Weidong

“We have noticed recent remarks with reference to China by the U.S. side. We firmly oppose any third-party meddling in China-India border issue and hope the U.S. relations with others not target any specific country,” wrote Chinese Ambassador to India Sun Weidong in a tweet on Wednesday.

In his farewell address on Tuesday, U.S. Ambassador Kenneth Juster had referred to India-U.S. “close coordination” on India’s challenge from “aggressive Chinese activity” on a “sustained basis” on its border, calling America’s cooperation during the eight-month long standoff as “very positive and very supportive”. While he refused to divulge specifics, which he said it was for the Indian government to disclose, the U.S. is understood to have helped India with geospatial map information and the expedited supply of extreme weather suits for soldiers.

“As far as the Chinese Ambassadors statement is considered, he must realise that after China’s unilateral actions on the LAC, and its stubborn position in talks to resolve the issue, China should not expect that other countries will not react or that the matter can remain purely bilateral,” Lt. Gen. D.S. Hooda, former Northern Army Commander, told The Hindu.

This is not the first time China has reacted sharply to comments by U.S. officials over the standoff since April 2020, after the PLA amassed troops at the LAC and claimed Indian territory. In May, its Foreign Ministry had termed remarks by outgoing State Department official Alice Wells on “provocations and disturbing behaviour by China” at the LAC and South China Sea as “just nonsense” and said the border issue had “nothing to do with USA”. In October, after U.S. Secretary of State Mike Pompeo promised to “stand with India” against what he described as China’s threats to India’s “sovereignty and their liberty”, the Chinese MFA had accused the U.S. of “preaching confrontation and geopolitical games”.

When asked about the diplomatic spat between the Ambassadors of the U.S. and China over the issue, the MEA declined to make any immediate comment. The government has maintained that it is resolving the situation at the LAC “bilaterally and diplomatically”.

In an interview to The Hindu last month, External Affairs Minister S. Jaishankar had even called for China to “take a bilateral path that is mutually respectful and mutual sensitive”, and not be as affected by “third parties” when dealing with India.

India and China have held a number of bilateral talks at various levels, including meetings of the Defence and Foreign Ministers, as well as combined diplomatic and military meetings. While there has been no breakthrough on the ground in terms of disengagement or withdrawal of troops, the two sides have held eight rounds of Corps Commander-level meetings, and are “in consultations” to hold the ninth round shortly, an official said.