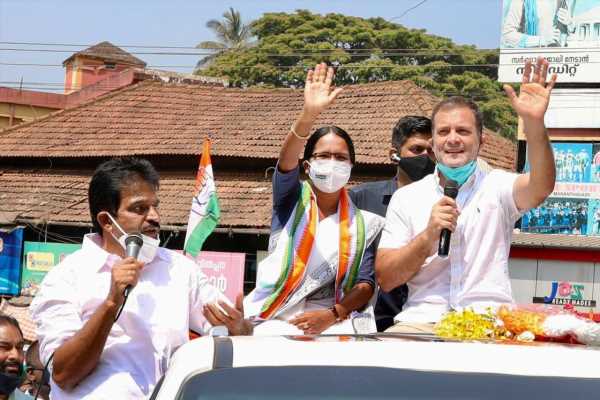 ‘We need good leaders to lead the party.’

On Saturday, September 25, V M Sudheeran, a former Kerala Congress Pradesh Coommittee president, resigned from the KPCC political affairs committee. This is the latest convulsion to affect the Congress party in Kerala.

A V Gopinath — a former MLA, former District Congress Committee president in Kerala, and a Congressman for 50 years — resigned from the party after the Congress ‘high command’ released a list of DCC presidents.

Gopinath tells Rediff.com‘s A Ganesh Nadar what ails the Congress in Kerala.

Why are you upset?

Why the the high command selected that group I don’t know. I don’t want to comment on that.

Are you upset that you and your supporters have not been selected?

My supporters have not been selected.

Do you think it would have been better if elections had been held for the posts?

Why does the Congress have so many factions in Kerala?

All leaders have their own factions. Nobody is interested in the party. The faction leaders, even for small posts, they want their own supporters.

Where do senior leaders like Oomen Chandy and Ramesh Chennithala stand in the Congress today?

They are not being consulted for major decisions. They are also unhappy. You will see the results in the Parliamentary elections. We need good leaders to lead the party.

If you keep fighting among yourself, when will you have time to fight the LDF (the Left Democratic Front) government in your state?

How to do that? We have no time to oppose the government (laughs). The government is having a good time without any Opposition.

What is your equation with Rahul and Sonia Gandhi?

I have been in the Congress for 50 years. I have always been with the Nehru family. I enjoy a good relationship with Rahul and Sonia Gandhi. I have problems with the local leadership in the Congress.

What is the status of the Congress in Kerala today?

We have a good future, but because of internal fights we are not succeeding. The high command has to take good decisions or we will suffer in the Parliamentary elections.

How did the LDF win two consecutive assembly elections in Kerala, something that has not happened in your state recently? What will be the effect of your resignation on the Congress in Kerala?

The party will develop if everybody is united. The high command should ensure unity. The Congress is good for the country.

We have to make Rahul Gandhi the prime minister for the development of the country.

Do your party members realise that your infighting will indirectly benefit the BJP?

Yes! That is the main problem. This will benefit the BJP. What do we do? The high command has to take our state seriously.

What future do you see for the Congress in Kerala and in the country?