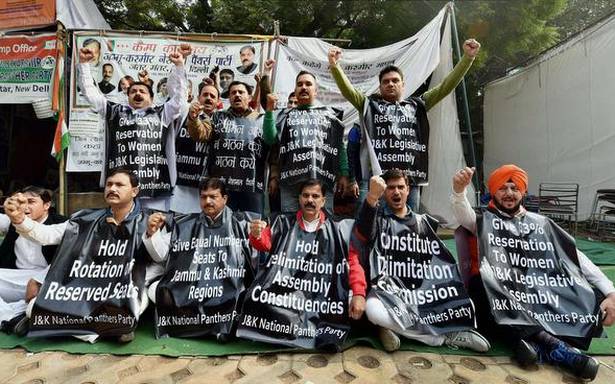 A provision in delimitation acts from 1952 onward, which says other than population, factors like physical features, boundaries of administrative units, communication facilities and public convenience, should be taken into account while drawing constituency boundaries, has led to the Opposition’s concerns over the ongoing delimitation of Jammu and Kashmir.

While officials of the Delimitation Commission say they have followed the rule in recommending six additional seats in Jammu and one in Kashmir, the National Conference (NC) has objected to the proposal, terming it unacceptable. The proposed increase in seats would tilt the balance of political power towards Jammu and away from the Kashmir Valley.

Explained | Why does the J&K delimitation exercise matter?

The proposal shared with associate members of the Delimitation Commission on Monday calls for increasing the number of seats in Kashmir to 47 and Jammu to 43, according to the members. After the meeting, NC MP and associate member of the Commission Hasnain Masoodi said the proposed increase was not based on the 2011 Census.

Asked about criticism of the proposal, a senior official involved with the process said the provision to consider factors other than population had “always been adhered to”. The official said Uttarakhand had all hill districts with 20% less population than the districts in the plains in the 2008 delimitation.

Former Chief Election Commissioner O.P. Rawat said the provision has been followed in other cases, like in Lakshadweep, which has one parliamentary constituency despite having a much smaller population.

Mr. Rawat added that as far as the Jammu and Kashmir delimitation was concerned, going by the initial proposal, the rules had been followed.

Section 9 (1) (a) of the Delimitation Act, 2002, read with Section 60 (2) (b) of the Jammu and Kashmir Reorganisation Act, 2019, specified that all “constituencies shall, as far as practicable, be geographically compact areas, and regard shall be had to physical features, existing boundaries of administrative units, facilities of communication and public convenience”.

“For the Opposition, it appears they have to find some issues that they can raise a red flag, which they may have found,” Mr. Rawat said.

Also read | Terrain, facilities in J&K to reflect in delimitation

Former CEC and member of the last Delimitation Commission, N. Gopalaswami, said “generally, delimitation is conducted on the basis of the population”. However, “if there are issues that impede the smooth conduct of elections”, they should be addressed. For instance, he said there could be a constituency split by a hill or the need to correct wrong delimitation in the past.