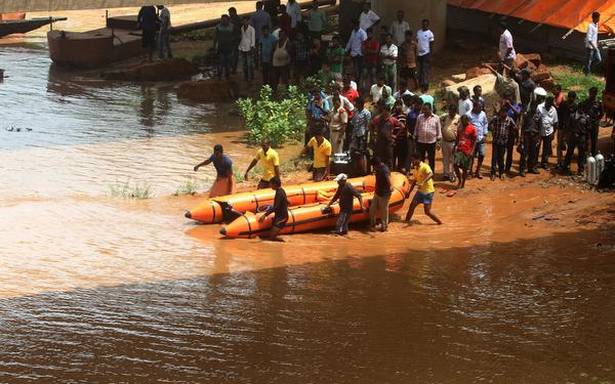 A day after a journalist died when an Odisha Disaster Rapid Action Force (ODRAF) boat that was sent to rescue a wild elephant stranded in the Mahanadi river capsized, the Odisha State Disaster Management Authority (OSDMA) sought a review of the standard operating procedure (SOP) for carrying outsiders on any rescue mission.

“I request Odisha’s Director General of Police to review the SOP and order that no outsider, civilian or media personnel should be part of any rescue mission,” Pradeep Kumar Jena, Managing Director of OSDMA posted on Twitter.

An ODRAF boat was sent on Friday to drive an elephant trapped in the Mahanadi floodwaters to walk ashore. The boat could not withstand the strong river current and overturned close to the Mundali Barrage, leading to death of journalist Arindam Das.

The body of a missing ODRAF personnel could not be traced in the Mahanadi river on Saturday. Mr. Jena, who had earlier said the decomposed body of ODRAF personnel Sitaram Murmu had been found, clarified that the body was yet to be traced.

The condition of three ODRAF personnel admitted to the SCB Medical College Hospital, Cuttack continued to be critical, while a little improvement was noticed in the condition of Pravat Sinha, video journalist, who is being treated in an intensive care unit.

After the tragic loss of life, Odisha’s disaster response authorities drew flak for accommodating the journalist and camera person in a highly perilous rescue mission. The deceased journalist’s sister, too, questioned the wisdom of allowing her brother on the boat.

Meanwhile, the elephant has been swept away by the river. The Forest and Environment Department, and the ODRAF, were not in a position to confirm the elephant’s whereabouts.