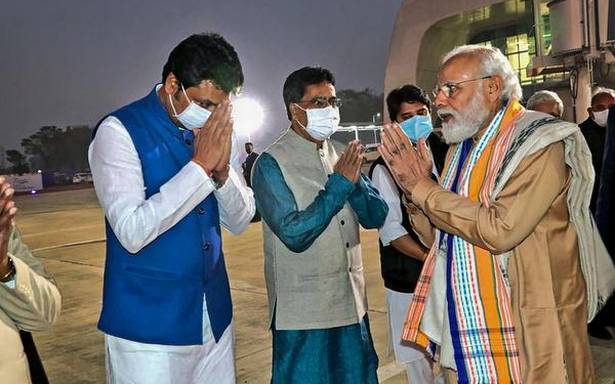 PM inaugurates a slew of projects in poll-bound Manipur, Tripura

Kicking off the BJP’s campaign in poll-bound Manipur, Prime Minister Narendra Modi on Tuesday made a pitch for oil palm plantations while envisaging the northeast as the driver of India’s growth story.

Mr Modi said previous governments had neglected the region and alienated its people until New Delhi was brought to the doorsteps of Manipur and the rest of the northeast after he became the Prime Minister in 2014.

“After Netaji Subhash Chandra Bose hoisted his army’s flag for the first time and called it the gateway to India’s independence, the northeast is now becoming the gateway to fulfilling the dreams of New India,” Mr Modi said at a rally Imphal after inaugurating 13 projects worth ₹1,850-crore and laying the foundation stone of nine others that would cost ₹2,950-crore.

He banked on farmers in the northeast to cash in on the Centre’s ₹11,000-crore oil palm mission.

“India spends thousands of crores of rupees in importing palm oil. Much of our mission to let the farmers benefit hugely from oil palm cultivation will happen in the northeast, including Manipur,” he said against the backdrop of protests in the region against the initiative.

Mr. Modi accused the previous Congress government in Manipur of creating a divide between the people of Imphal Valley and the hills around it. While the valley is dominated by the largely Hindu Meitei community, the hills are inhabited by several tribal communities, many of whom are Christians.

Lauding the State’s BJP-led coalition for bridging the hill-valley divide, the Prime Minister said the “double-engine government” has transformed Manipur from a “blockade State” into one ready with routes for international trade.

“We should remember how the previous government made Manipur a blockade State,” he said, referring to economic blockades that used to be frequent before 2017.

Mr. Modi said there was a time when Manipur was left to its fate but he brought the Government of India to the people’s doorsteps in the State and its northeastern neighbours. The attention to the region was evident from the renaming of Mount Harriet in the Andaman & Nicobar Islands to Mount Manipur, he added.

“I asked the leaders, officers and ministers to regularly visit the northeast, spend time and formulate need-based schemes. Five from the northeast are in the central ministry,” he said.

He credited the Centre-State coordination for extinguishing the “fire of insurgency and security” in the northeast. “There is the light of peace and development. Hundreds of youths in the region have joined the mainstream of development by shunning guns,” he said.

The Prime Minister underlined how his government’s schemes have made a difference in the lives of the people in the northeast. “The Jal Jeevan Mission has covered 60% of Manipur’s households compared to 6% who had piped water a few years ago,” he said.

“More than 4.25 lakh people of Manipur are getting the benefit of Ayushman Bharat and more than 1.30 crore families have been given free gas connections. This is the result of your one vote. You helped form a stable government and it is running with a full majority and full force,” he said.

A “lockdown” called by CorCom, a conglomeration of six extremist groups, had greeted Mr Modi and his entourage after he landed in Imphal amid tight security.

In Tripura’s capital Agartala, his second stop in the region, the Prime Minister highlighted the connectivity with adjoining Bangladesh to project the State as a gateway to usher in all-around development in the northeast.

“Tripura has established roadway and waterway connectivity with Bangladesh and the government has been making efforts to complete the Agartala-Akhaura (Bangladesh) rail link soon to boost the State’s position as an economic corridor,” he said at a public rally.

Mr Modi appreciated Tripura’s bamboo-based economy and focus on horticulture and farm products. He attributed the “spate of development” in Tripura to the coordination between the same party governments in the State and at the Centre.

He slammed the previous (Left Front) government in the State for corrupt practices unlike the current government that “rides the vehicle of development”, citing an amendment in the Pradhan Mantri Awas Yojana that helped 1,80,000 poor families in Tripura become beneficiaries.