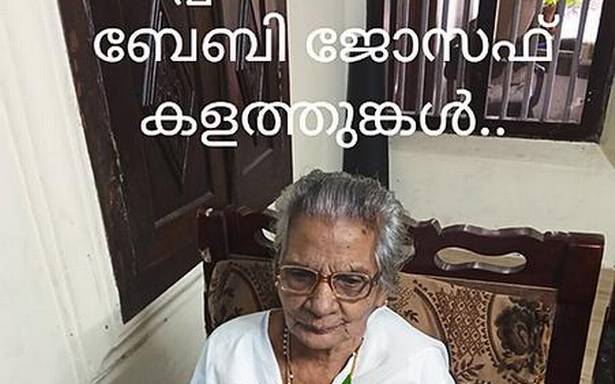 Baby Joseph Kalathungal, who turned 97 on Monday, is a veteran pokkali farmer, who looks forward to a rich harvest after more than a decade of disappointments. She says she is awaiting the day when she will be able to harvest again the five acres that she inherited as part of family property in Maruvakkad in Chellanam panchayat, where the paddy collective extends over a total of 420 acres with around 260 acres identified as cultivable.

Pokkali cultivation has been disrupted in the paddy collective for more than a decade, but Ms. Kalathungal’s indomitable spirit was evident during a brief birthday celebration, in which only a few people participated, restricted by the COVID-19 protocol.

Pokkali rice cultivation in the Maruvakkad paddy collective has caught attention with the Kerala High Court directing the district administration to make arrangements quickly to drain the fields to pave the way for rice cultivation. The directive came on a petition by farmer Manjadiparambil Chantu. After the court directive, revenue officials visited the paddy collective on Saturday to review the condition of the fields.

Pokkali farmers have been appealing for intervention from the authorities to help maintain the traditional rice-and-fish cycle. However, they had alleged that the lucrative shrimp farming had resulted in the rice cycle being abandoned mid way or in pushing up the cost of cultivation. But farmers like Ms. Kalathungal is not put down easily. She is ready to take up cultivation if the fields can be readied for sowing.

Pokkali rice is a saltwater-resistant variety that is grown along the coastal fields of Alappuzha, Ernakulam and Thrissur. The rice variety has won global attention with its resilience and has been granted the Geographical Indication tag.

The traditional farming cycle comprises one-rice-one-fish season, each spread equally over a period of one year. Over the years, shortage of labour, rising costs, and heavy rains due to substantially changed climatic conditions have resulted in the rice cultivation taking a big beating.