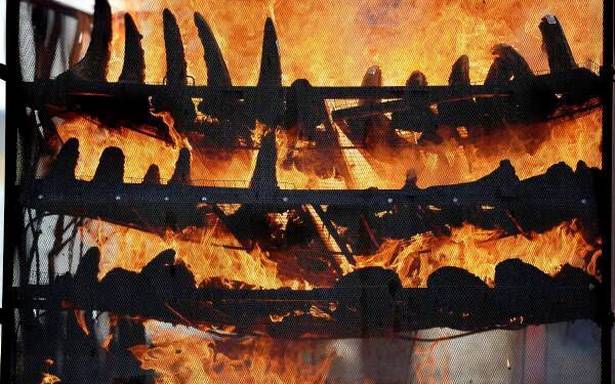 The “world’s largest stockpile” of rhino horns was consigned to flames in eastern Assam’s Bokakhat, the headquarters of the Kaziranga National Park and Tiger Reserve, amid Vedic rituals on Wednesday.

The event timed with the World Rhino Day was aimed at dispelling myths that have driven the illegal horn trade and the poaching of the animal.

Wildlife officials said 2,479 of the 2,623 horns stored in 12 district treasuries since 1979 were burnt in six large iron pyres placed at a stadium in Bokakhat, about 240 km east of Guwahati. These were lit remotely through drones.

Among the destroyed were 21 fake horns seized from smugglers and traders and 15 African rhino horns brought from the Assam State Zoo in Guwahati.

“We organised this event to convey to the world that rhino horns are just a mass of compacted hair and they have no medicinal value. We urge people not to kill these rare animals or buy their horns based on superstitions or myths,” Assam Chief Minister Himanta Biswa Sarma said after initiating the horn-burning programme.

Ten of his Cabinet colleagues, the chief of two tribal councils and senior officials attended the programme.

“Rhino horns are burnt in Africa but not so many at a time. I think we have set a world record,” Dr. Sarma said, adding that all horns recovered from rhinos dying naturally or during disasters and accidents would henceforth be burned annually.

P. Sivakumar, Kaziranga’s Director, said 29 horns implicated in court cases, will be kept in the treasuries while 94 others, including the heaviest at 3.05 kg, will be preserved for exhibition or educational purposes. The State government will set up a natural history museum near the national park to showcase the preserved horns.

Before the destruction, experts had verified the horns using scientific methods at the treasuries they were kept in. Each horn was cleaned, weighed, photographed, labelled with a unique barcode, packed and sealed again after extraction of DNA samples.

“The ashes will be stored and used in a life-size rhino to be put up at Mihimukh, the main entrance to the Kaziranga National Park,” Mr. Sivakumar told The Hindu.

The event was preceded by an elaborate Vedic ritual that entailed performing the last rites.

Wednesday’s was the second such mass-burning of animal body parts in eastern India. A stockpile of rhino horns and elephant tusks was burnt in West Bengal’s Chilapatha forest (Alipurduar district) in 2005-06.