”Why should Khargeji work against the Gandhis for the sake of proving his independence?’

In this interview with Prasanna D Zore/Rediff.com, Professor Pote offers his glimpses into the man who will be soon adorn the thorny crown of Congress president by virtue of winning the party’s first presidential election in 22 years.

“He may be 80 now, but he has enthusiasm of a young person…He missed the CM’s chair thrice because of this independent streak and his aggressive style of politics… Aggression he will have to show, but aggression doesn’t mean that he should be on a collision course with anybody. That is not his leadership style.”

How do you look at Mallikarjun Kharge’s elevation as Congress president?

I have known Kharge saheb for some 25 years now and I have seen his hard work and struggle to rise in public life.

The Congress has elected a secular, Dalit, and mass leader as its president and these traits will go a long way in helping Khargeji build the party with the help of all the stakeholders of the party.

He has been a very popular leader elected for nine consecutive terms as an MLA (from Gurmitkal constituency between 1972 and 2008), has worked as an influential yet loyal minister under different chief ministers; worked hard his way as a consensus builder. 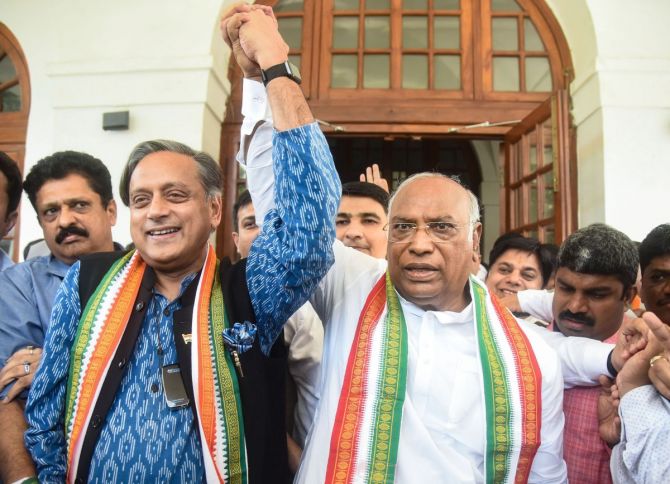 How will the Congress benefit from his election as president?

He has been a follower an ardent follower of Basavanna (the 12th century Lingayat social reformer, poet and philosopher having a huge following in Karnataka) and Dr Babasaheb Ambedkar. He strongly believes that social reform can help uplift the poor and the downtrodden.

He has followed Dr Ambedkar’s and Basavanna’s teachings to uplift the downtrodden.

He may have missed the chance to become Karnataka’s chief minister thrice, but no doubt the poor, the downtrodden and masses at the grassroots in the country will positively see Khargeji‘s elevation as Congress president.

Definitely, the Congress will get a huge boost for having elected a grassroots, committed, party worker.

However, Khargeji‘s appeal is not limited only to south India. The whole country has seen him as an aggressive leader in the Lok Sabha (elected from the Gulbarga (SC) constituency in 2009 and 2014 and as a Rajya Sabha MP since 2019; he was the leader of the Opposition in the Rajya Sabha from February 2021 to September 30, 2022).

He has spoken on behalf of women, Dalits, the poor and the oppressed from across India during his eight years in the Lower House (Lok Sabha) of Parliament.

He will be the voice of the women, the poor and the oppressed as Congress president.

He will also emerge as a great consensus builder and offer a new light to the party and its popularity among these sections.

People know Khargeji as a doer. He speaks Kannada, Hindi, Urdu, and English very well. He has been in politics for well over five decades and given his political experience Khargeji will surely make his mark as Congress president.

He may be 80 now, but he has enthusiasm of a young person and I am sure he will offer a youthful, independent, leadership to the party. But the opposition as well as many within the Congress label Mallikarjun Kharge as the Gandhi family’s rubber stamp.

Let people say whatever they want to. Khargeji is known for his independent streak and fierce loyalty to the party; he is his own man.

He missed the CM’s chair thrice because of this independent streak and his aggressive style of politics.

But to make his impact he will have to show his aggression as well as independence. Won’t that work against him as Congress president?

Aggression he will have to show, but aggression doesn’t mean that he should be on a collision course with anybody. That is not his leadership style.

He has worked for more than 15 years with Sonia Gandhi, Rahul Gandhi, Priyanka Gandhi and he has always consulted not just the Gandhis, but other leaders in the Congress. He has been quite popular among even the grassroots leaders in the party.

That he is a great consensus-builder has been one of his best traits.

Wouldn’t this proximity to the Gandhis make him a target of ridicule of those who call him a rubber stamp of the Gandhis?

He has always worked independently while in Karnataka as well as during his stints in the Lok Sabha and Rajya Sabha.

Both the Gandhis and Khargeji have the good of the Congress at heart and often they are on the same page on many issues. The Gandhi family also thinks about the welfare of all Indians. As a Congress president, Khargeji‘s task will also be welfare of all sections of Indians. What’s wrong with that?

What will be the biggest challenges before the new Congress president?

Winning Himachal Pradesh, Gujarat and Karnataka will be the top-most priority of not just the Congress president but each and every party worker.

He will have to work hard towards neutralising the effect of religious polarisation in the country.

In Karnataka, Khargeji is not seen as a Dalit leader but as a Congress leader. He was elected president not because he is a Dalit. It was a free and fair election.