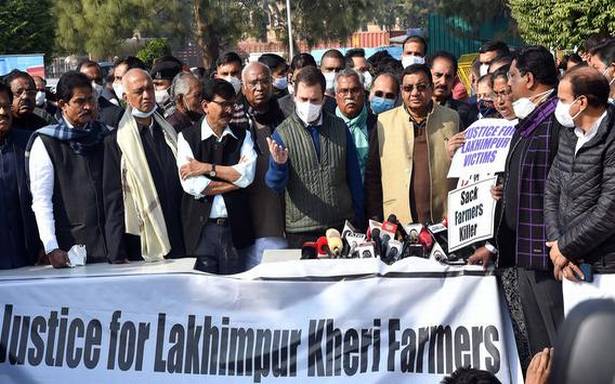 Opposition leaders on Tuesday held a joint march from the Gandhi statue, where the 12 suspended Rajya Sabha MPs have been protesting for the last 21-days, to Vijay Chowk demanding the resignation of Union Minister Ajay Mishra in the Lakhimpur Kheri violence case.

Former Congress president Rahul Gandhi said the Opposition will not rest till the Minister is sent to jail. Mr. Mishra’s son, Ashish Mishra, has been arrested in connection with the case. He flagged the SIT report of the U.P. government, which said the incident of mowing down of the protesting farmers in Lakhimpur Kheri was not an isolated incident, but a conspiracy.

“We will not spare him (Ajay Mishra) and continue our struggle till he is sent to jail,” Mr. Gandhi told reporters at Vijay Chowk. He was flanked by DMK’s Tiruchi Siva and Shiv Sena’s Sanjay Raut.

Mr. Gandhi also launched an attack on both the government and the media.

“The Prime Minister has not done anything on this. Neither the government nor the media is doing its job,” he said.

Mr Gandhi accused Mr. Modi of doublespeak, saying on the one hand, he apologies to farmers, while on the other Mr. Mishra continues to be in his cabinet.