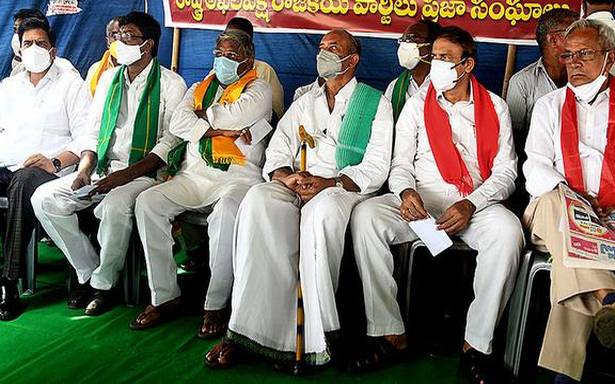 ‘Govt. trying to shift the residents by force without giving the promised benefits’

Leaders of the Left parties, Adivasi Sangams, farmers’ associations observed a day long fast here on on Monday, demanding that the State government must implement the Relief and Rehabilitation (R&R) package to all the Polavaram project evacuees in the twin Godavari districts.

The leaders, who visited the project-affected habitations in Polavaram, Buttaigudem, Kukunur, Jeelugumilli, Velerupadu, Chinturu, Yetapaka, Kunavaram and other mandals, decided to highlight the plight of the evacuees. Speaking during the fast, CPI (M) State secretary M. Madhu alleged that government was trying to shift the families from the affected villages by force without giving the compensation promised to them.

He said that the leaders of all parties would intensify the agitation, if justice was not done to the Polavaram project evacuees in the Agency area.

CPI State Secretary K. Ramakrishna said many tribal families were facing problems due to the Godavari backwaters, but the officials were trying to evacuate them without implementing the R&R package.

The said the water level was raising by the day, and urged the government to give R&R package to all the eligible families and initiate measures to protect the tribal people from flood.