In an all-party meeting on Sunday, a day before the Monsoon Session of Parliament begins, Parliamentary Affairs Minister Prahlad Joshi announced that Prime Minister Narendra Modi will address MPs of both the Houses — Rajya Sabha and Lok Sabha — on July 20 and speak on the pandemic. 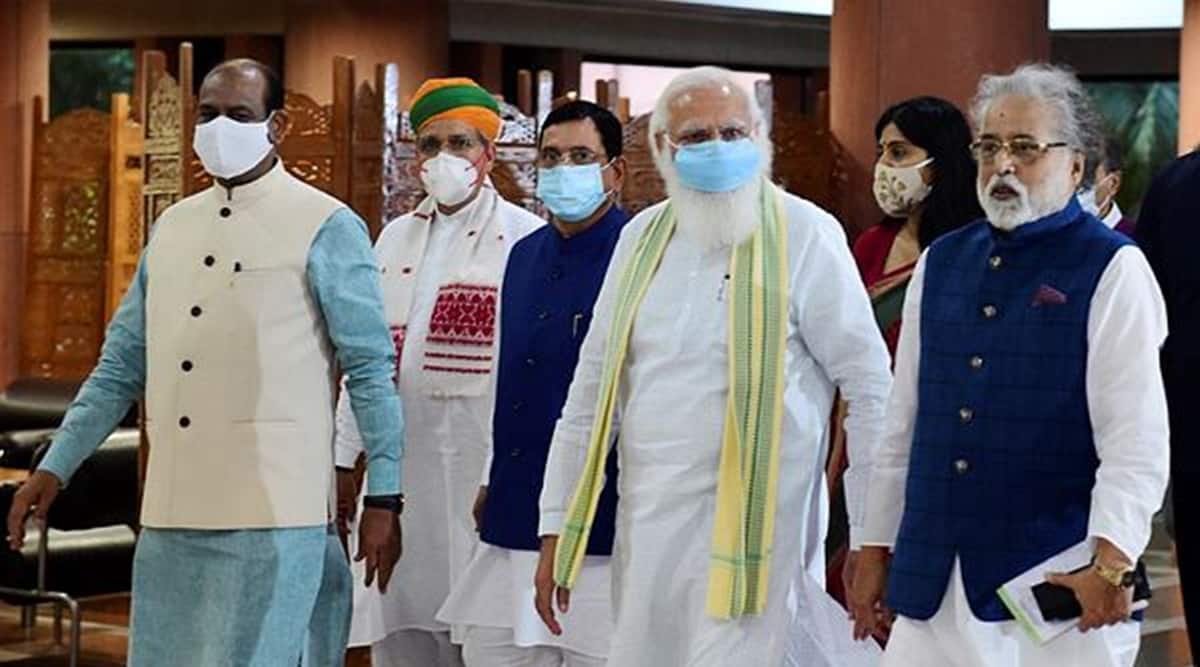 Opposition parties on Sunday objected to the government’s offer for a joint address to all MPs by the prime minister on Covid at the Parliament annexe, saying this will be “highly irregular” at a time when Parliament will be in session and it aims to “bypass” norms.

Leaders, including from the Trinamool Congress (TMC) and the CPI(M), also said that when the Covid pandemic and issues related to it can be discussed on the floor of the House, what was the need to go “outside”.

The annexe is a separate building within the premises of the Parliament complex.

In an all-party meeting on Sunday, a day before the Monsoon Session of Parliament begins, Parliamentary Affairs Minister Prahlad Joshi announced that Prime Minister Narendra Modi will address MPs of both the Houses — Rajya Sabha and Lok Sabha — on July 20 and speak on the pandemic.

“What is the need to go outside Parliament? Any address should be on the floor of the House. This is another idea to bypass Parliament. Stop making a mockery of the Parliament. How far will Modi and (Union Home Minister Amit) Shah go? Just when we thought that they cannot go lower, they want to make a presentation in the annexe and not on the floor of the House,” TMC Rajya Sabha member Derek O’Brien, who was at the meeting, said.

The meeting was attended by 33 parties ahead of the Monsoon session which will conclude on August 13.

“MPs do not want fancy power point presentations on COVID-19 from the PM or this government in some conference room. Parliament will be in session. Come to the floor of the House,” O’Brien said.

Sources in other opposition parties confirmed that Parliamentary Affairs Minister Joshi’s offer has been refused and that some have even suggested a joint sitting of the Houses at the Central Hall.

CPI(M) general secretary Sitaram Yechury said that the party’s position has always been that when Parliament is in session, whatever the government has to say, it can do so on the floor of the House.

“It is highly irregular for the government to do this. When the Parliament is in session, any address or presentation the government wants to make, it has to be done from inside Parliament. Our stand on this has been very clear,” he said.

O’Brien claimed that all opposition leaders present in the meeting, including Leader of Opposition in Rajya Sabha Mallikarjun Kharge and Leader of Congress in Lok Sabha Adhir Ranjan Chowdhury, Samajwadi Party’s Ramgopal Yadav and Bahujan Samaj Party’s Satish Mishra refused to be addressed “outside” Parliament.

Some opposition party MPs, on the condition of anonymity, said some parties have already planned to give notices on the Covid situation issue in Parliament and no one wanted to listen to the government anywhere other than the floor of the Parliament.

The sources also said that NCP leader Sharad Pawar was the lone opposition leader who did not outright reject the proposal of the prime minister’s address at the Parliament annexe.

During the meeting, almost all parties raised issues related to fuel prices, farm laws, Covid and the state of the economy, they said.

Kharge hit out at the prime minister over his short presence at meeting and said that it was an “insult” to all political parties present. He also raised the issue of appointment of a deputy speaker, and said this should be done.

O’Brien also tweeted about the short presence of the prime minister.

While the DMK raised the issue of GST devolution, the TRS urged the government to make public sector units profitable and not go for disinvestment. The Samajwadi Party accused the government of passing Bills in a hurry and its leader Ramgopal Yadav alleged that the Maharashtra and West Bengal governors had belittled chief ministers of the states.

The BJD demanded that the Centre to procure surplus rice from Odisha, release pending food subsidy and provide a share of the additional cess from fuel and cooking gas to states to help them fight Covid.

Several parties said that their concerns were not being heard by the government and being “bulldozed”.

The TMC, during the all-party meet, alleged ruining of the federal structure, “motivated” functioning of the central agencies and lack of Covid vaccines. The return of MPLAD funds and Women’s Reservation Bill issues were also raised by the party.

Four political parties, including TMC, TRS, YSRCP and BSP, demanded that there should be a discussion on Schedule 10 of the Constitution which deals with disqualification of lawmakers.

Multiple petitions by the TMC and the YSRCP are with the Lok Sabha speaker and they seek disqualification of MPs. They had earlier demanded a time-bound process for this.

The government is slated to bring in 29 bills and two financial bills during the Monsoon session.

Opposition parties have made it clear that the government must allow proper discussion and review of the bills before they are passed.

On day one of the session, the prime minister will introduce the newly inducted ministers to both the Houses.

It is the convention that after the formation of a new government or an expansion or reshuffle in the Union Council of Ministers.

There was a major rejig in the Union Council of Ministers recently. While several new faces were inducted, some ministers were elevated to the Cabinet rank and portfolios of some others were changed.

Some new members who recently entered Lok Sabha following bypolls would also take oath as members of the lower house on Monday.