UP Chief Electoral Officer L Venkateshwarlu said that EVMs used in the polls and the VVPATs were sealed properly in the presence of representatives of all candidates, and the process was videographed. 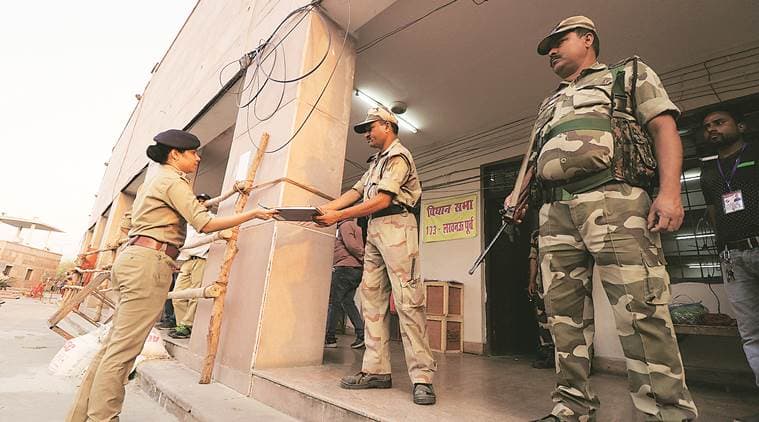 Uttar Pradesh Chief Electoral Officer L Venkateshwarlu on Tuesday dismissed as baseless the allegations that suspicious EVMs were found near strongrooms in different parts of the state. The officer said that EVMs used in the polls and the VVPATs were sealed properly in the presence of representatives of all candidates, and the process was videographed.

Samajwadi Party (SP) district president Ajay Chaudhary alleged that Itwa town tehsildar Rajesh Agarwal was transporting EVMs in his car and a vehicle on May 14 when Opposition leaders reached the spot. He told The Indian Express: “We don’t know whether they were reserve EVMs or not, or if they had been used for voting. They were taking them in a vehicle with no registration number. When we intervened, Rajesh Agarwal told us he had orders from an EC official to transport them to Deoria… Why were Opposition candidates not informed about the transportation of EVMs?”

After the incident, Venkateshwarlu said, the District Election Officer made Opposition leaders review the strongroom and they were “satisfied”.

“The complaint from Domariyaganj is regarding transportation of EVMs for next phase of voting in the state. We have given a list of reserve EVMs and VVPAT machines to all parties. The strongroom in the constituency is being kept under vigil 24 hours,” a statement issued by UP CEO stated. Additional CEO Brahm Dev Tiwari told The Indian Express that there was “no issue over a truck in Ghazipur and one representative of each candidate has been allowed to sit outside the strongroom in shifts of said eight hours.”

A video of EVMs being allegedly transported in Chandauli constituency was shared on social media. SP district chief Satyanarayanan Rajbhar said the EVMs were being transported without informing the SP candidate. “Officials told us that spare EVMs were brought to the strongroom from Sakaldiha Vidhan Sabha area. How can we be sure whether they were spare or used (EVMs)? Why were we not informed about a truck entering the strongroom premises,” Rajbhar asked.

The EC stated, “Reserved and unused EVMs and VVPATs were being sent to decided strongroom after informing the candidates of all parties. Representatives of one party opposed this and demanded that those EVMS and VVPATs be transferred to the Collectorate office. We then sent the machines to Collectorate office and representatives of all parties were satisfied.”

The EC statement said, “The case is related to news of EVMs kept in the vehicle of City Magistrate, Jhansi. These EVMs were unused and were being taken to the concerned strongroom after the voting ended. The whole process was completed in front of the candidates and they were satisfied.”

Two days after voting in Haryana, a truck full of steel boxes was intercepted by Congress workers — the vehicle had entered Bhoria Khera college in Fatehabad district, where a strong room is located. Fatehabad is part of Sirsa Lok Sabha constituency. Congress workers alleged that the boxes carried EVMs, which were meant to be replaced with those in the strongroom.

Fatehabad Deputy Commissioner Dhirender Khadgata told The Indian Express: “The strongroom is guarded round-the-clock in a three-tier security cordon. Representatives of political parties are also constantly guarding it. On May 14…we found that the truck was being escorted by Tehsildar on directions of the Assistant Returning Officer and was brought from Tohana. After counting on May 23, EVMs had to be stored in these empty boxes and kept in safe custody. After we clarified the actual situation to them (Congress workers), they were satisfied with our reply.” —With ENS in New Delhi, Chandigarh