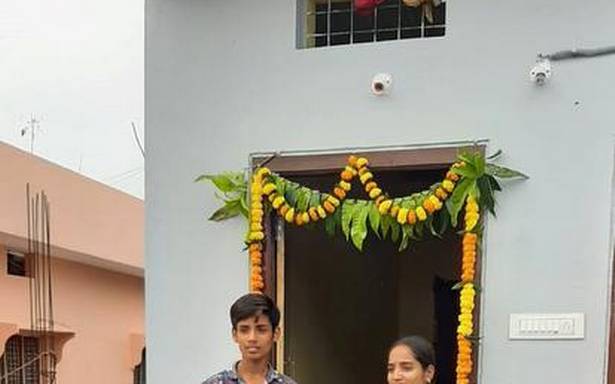 Sunday, June 27, turned out to be a memorable day in the life of Golla Srilatha and her brother Prashanth when they moved into their new house with a single bedroom, hall and a kitchen. They never imagined even in their wildest dreams that their hutment would be replaced by a pucca house.

The children lost their father Mallesham in 2016 and mother Suguna in 2019. By the time Suguna passed away, Srilatha completed her Intermediate while Prashanth had passed only 10th class. They were staring at an uncertain future and did not know what to do.

Relatives proposed to marry off Srilatha so that a major responsibility could be fulfilled. However, she vehemently rejected the idea, vowing that she will not marry till Prashanth completed his education. Her story was published in a vernacular newspaper and kind-hearted people came forward to extend financial assistance. Some even proposed to help in constructing a house for the siblings.

Both the sister and brother held the house warming ceremony on Sunday and entered the new house.