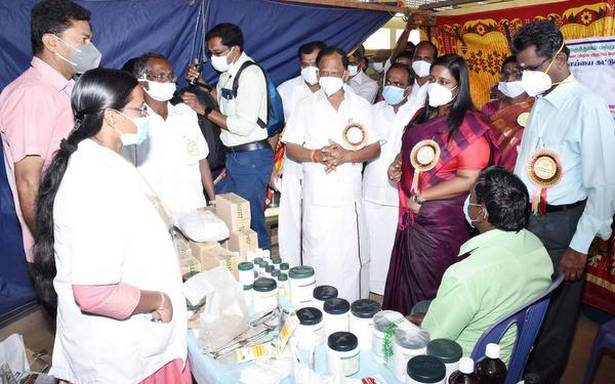 A total of 475 tribal people participated in a special medical camp organised by the district administration at Valvil Ori auditorium at Semmedu in Kolli Hills here on Tuesday.

The camp, Nalam Kappom Kolli Malai, was inaugurated by District Collector Shreya P. Singh in the presence of Senthamangalam MLA K. Ponnusamy and other officials. A total of 182 men and 293 women, including 24 children, took part in the camp. While echocardiogram was taken for 42 persons, 237 were screened for eye defects, 74 persons for defects in ear, nose and throat. A total of 44 pregnant women underwent scanning during the camp. People from 10 hamlets participated in the camp.

Medical insurance cards were distributed among the beneficiaries. The Collector gave sanitisers and face masks to 200 persons.

Career guidance was also given to youths for taking part in competitive examinations. Details of 16 differently abled persons were collected for identity cards during the camp .

The Collector said that a similar camp would be held at the Panchayat Union Middle School at Thottikadu on December 30 to benefit the residents of 12 villages in Kolli Hills.