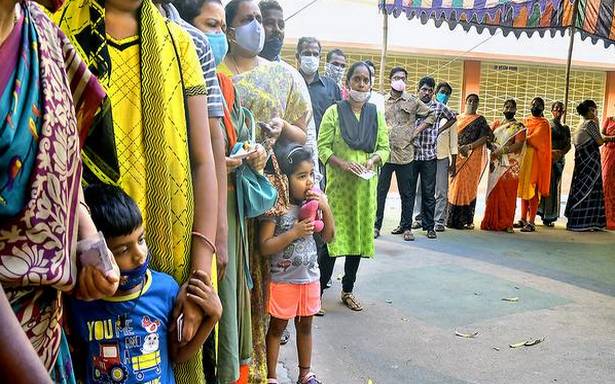 The elections to the Greater Visakhapatnam Municipal Corporation (GVMC), held on Wednesday, were peaceful with no untoward incident reported from any of the 98 wards, under eight different zones. A total of 8,13,071 voters exercised their franchise, recording 56.01% polling.

The polling process began sharp at 7 a.m. and in some of the polling stations, senior citizens were the first to reach. “I came in the first hour, as the rush would be less and I can cast my vote without any hassle,” said Ch. Srinivasa Rao, a retired government employee, at Madhavadhara.

Though the polling was dull in many of the wards, some areas such Appughar and Peda Jalaripeta, witnessed long queues by 8 a.m.

With the issue of privatisation of Visakhapatnam Steel Plant raging, all polling stations around Gajuwaka and the VSP were notified as sensitive and hyper sensitive.

In defiance of the Centre’s proposal for 100% strategic sale of the VSP, employees of the plant dropped an extra slip of paper with the slogan ‘Save VSP’ into ballot boxes. District Collector V. Vinay Chand later in a statement urged the voters not to do so, as it was illegal.

In general, polling has been peaceful across all the 98 wards in the GVMC and in the 22 wards in Yelamanchali and 28 in Narsipatnam municipalities.

Not only adequate security personnel were deployed at all polling stations to see the smooth conduct of the polls, The district authorities took COVID-19 precautions as per the protocols.

In every polling station about two to three counters manned by ASHA workers with sanitisers and hand-held thermal scanners were placed. All voters entering the booth had to pass through our counters, said an ASHA worker at a polling station in Muralinagar.

The sprawling campus of the Gajuwaka High School had a number of polling booths but the voters were distributed and hence there was not much crowding. While many of the voters wore masks, some of them, including senior citizens, seemed oblivious to the COVID-19 threat as they moved around the campus without masks.

The authorities, however, arranged thermal scanning and sanitisation at all the booths. An ASHA worker said that they have not recorded above normal temperature so far (till around 11.30 a.m.) but did not rule out higher temperatures as the voters in queue were standing in the open with no protection and temperature would rise by noon. Though the Gajuwaka High School campus had lot of open space inside, the roads leading to the school from the Gajuwaka Main Road and the National Highway, on the other side, were narrow. People were seen gathering in groups outside the school campus though 144 Section was in force in the vicinity of polling stations.

“Traffic jams are common on the Gajuwaka Main Road. This being in the industrial area, there is heavy traffic, including trucks and other heavy vehicles, during the mornings and evenings. A flyover is required at Old Gajuwaka to reduce traffic congestion,” says Nagireddy Ramesh, a taxi driver of Gajuwaka.

An old man was seen being carried by his relative at the Social Welfare Hostel Polling Station on BC Road. Police personnel were seen announcing on the mike not to gather near the polling station as Section 144 was in force. Youngsters turned up in good numbers even as senior citizens were comparatively less. The COVID-19 threat seems to have deterred them from coming to the booths.

Though there is no doubt that the decision of the Centre to privatise Visakhapatnam Steel Plant (VSP) would have a definite impact on the minds of voters in the industrial areas of the city, it is difficult to fathom the minds of the voters on their choice.

An old woman, who suffered paralysis, was carried in a chair at the Mandal Parishad Primary School at Lakshmipuram of Pendurthi mandal. Though queues were in order inside the polling station, a number of men gathered outside the compound wall, without masks, and distributed buttermilk sachets to the public.