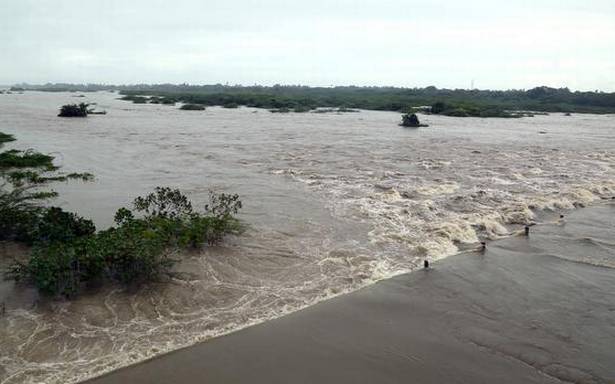 Courtallam falls out of bounds for visitors till January 17

With no credible infrastructure in place beyond Srivaikundam check-dam to store surplus water of the Tamirabharani during flood, over 60,000 cusecs of water was going waste into the Gulf of Mannar on Wednesday.

The continuing widespread rain, particularly in the catchment areas of the already overflowing dams, has swelled the Tamirabharani since Tuesday, forcing the officials to move the people living in the low-lying areas close to the perennial river.

The flood water that entered the cultivable lands in Murappanadu, Vallanaadu, Muthalankurichi, Alwarthirunagari and Karungulam gave tense moments to the farmers, who have cultivated paddy in their ranches. “The submerged paddy and plantain can be saved only if the rain stops for a few days so that the stagnant water can be drained at the earliest,” says farmer Soundararajan of Pandaravilai.

The Collector also inspected the estuary at Punnaikayal where the Tamirabharani enters the Gulf of Mannar.

After giving a brief respite to the residents, rain returned to Thoothukudi in the afternoon on Wednesday to cause water-logging in several parts of the port town. Above all, the rain completely paralysed the last minute Pongal sale.

When the flood water from the Tamirabharani overflowed onto the nearby Tirunelveli – Tiruchendur Highway at Karungulam around 6.30 p.m., vehicular traffic along this busy road was stopped. The vehicles going to Tiruchendur from Tirunelveli were diverted via Vasavappapuram and Deivaseyalpuram.

Following heavy rainfall along the Western Ghats, all waterfalls in Courtallam experienced flood on Wednesday. Consequently, the visitors were not allowed to take bath in the Main Falls, Five Falls and the Old Courtallam Falls.

Farmers who would usually enjoy excellent sale of vegetables during ‘Pongal’ were badly hit by this unseasonal rain this time. “Since the season started on a promising note with sufficient rainfall since November, the farmers were hoping for a good harvest during Pongal this year. However, the unseasonal rain has played spoilsport, unfortunately, as the vegetables could not be harvested amidst rain,” said N. Balasubramanian, a vegetable grower from Alangulam.

Sugarcane sellers, who had brought several truckloads of sugarcane from Madurai, Theni and Thanjavur, and were selling a bundle of 15 sugarcanes at ₹ 350 till Monday, were struggling to find customers, who remained indoors due to incessant drizzle.

As the catchment areas of the dams continue to record good rainfall, discharge of water from the near-full Gadana, Ramanadhi and Karuppanadhi dams is heavy since Tuesday. Of this, over 3.300 cusecs of water is being discharged from Gadana dam alone.

Collector G S Sameeran has said that the public would not be allowed entry into the Courtallam falls till January 17. Already, the falls had been experiencing huge inflow due to the widespread rain. With covid-19 pandemic SOP in place, the district administration had proposed to suspend public entry till January 17 and appealed to the people to cooperate with the officials.