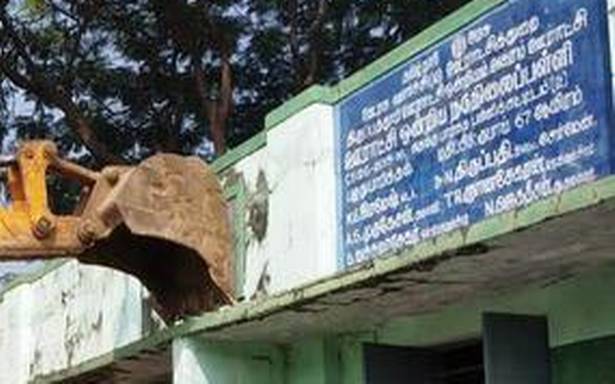 Education officials have identified these structures in Vellore, Tiruvannamalai, Ranipet and Tirupattur districts

More than 800 dilapidated school buildings in Vellore, Tiruvannamalai, Ranipet and Tirupattur were identified for demolition by the District Education Officers.

The move comes in the wake of the death of three students due to the collapse of a toilet wall in a government-aided school in Tirunelveli.

Vellore Collector P. Kumaravel Pandian ordered the demolition of 112 school buildings, including 77 classrooms, mostly in higher secondary schools, in the district as they were found unsafe.

Demolition work began immediately in some schools in the district following an order by the School Education Department to take action within 48 hours.

The District Education Officers were given clear instructions to demolish buildings that were not fit for use. In many schools, officials said the old buildings were not being used as classrooms but as storage rooms.

On Tuesday, Tirupattur Collector Amar Kushwaha inspected the demolition drive in the district. Of the 265 identified buildings, 19 buildings have been razed. Most of these buildings are over four decades old. More than 80% of total identified school buildings in these districts are government and aided schools. Tiruvannamalai Collector B. Murugesh ordered demolition of 143 buildings in the district. Currently, 73 buildings were being demolished. District-level authorities have been instructed to conduct inspections and monitor the quality of buildings as the recent rain may have caused damage.