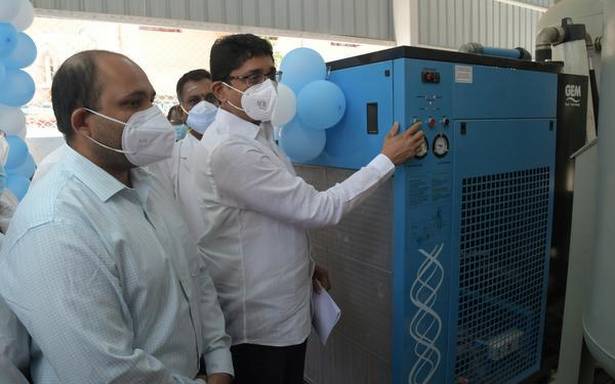 Two Pressure Swing Adsorption (PSA) medical oxygen generation plants, each at ₹1 crore, that can supply oxygen to 200 patients at a time, were commissioned at the District Headquarters Hospital and the Government Erode Medical College and Hospital (GEMCH) at Perundurai in Erode on Thursday.

The plant was installed at a cost of ₹1 crore under the PM Cares Fund.

The plant was supplied by Defence Research and Development Organisation, while National Highways Authority of India carried out the platform construction works and the plant was installed by a private company.

The plant was installed at ₹1 crore and would serve 100 patients at a time. Joint Director of Medical Services Rajasekar, hospital Dean R. Mani and other doctors were present.

Collector S. Dhivyadarshini inaugurated oxygen generation plants at the government hospitals in Dharmapuri and Pennagaram. She said the plants were part of the preparedness to meet the pandemic in the event of a potential third wave.