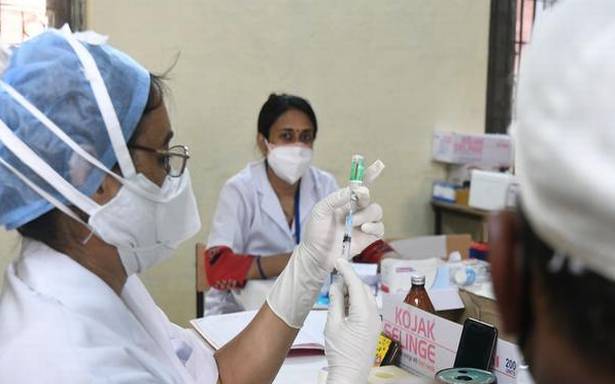 At the current pace of vaccination, it could be eight months before every adult Indian gets at least one shot of vaccine, back of the envelope calculations from the government’s portal CoWin suggest. About 16.7 crore first doses have been administered as of Monday.

The Centre expects to inoculate 94.4 crore adults, according to a note last week by R.S. Sharma, Chairman of the technical committee that oversees the CoWin portal. Several Cabinet Ministers and policy advisors, spearheading India’s COVID vaccination campaign, have claimed that India will inoculate “all eligible” by December. These statements don’t specify if that refers to just all adults, or the number of doses administered.

Last week, India administered 30 lakh doses a day on consecutive days — after over 45 days when less than 20 million doses were given per day. Assuming that pace were to continue, it would take 256 days, or over eight months, to complete the targeted adults.

The recommended vaccination protocol is to administer two doses at least 4-16 weeks apart depending on the vaccine administered. Given that only 4.4 crore second doses have been administered and the daily pace of second doses — for most of last month — has been about 10% of that of the first dose (on May 29, 27 lakh first doses were administered to 3 lakh second doses), it could theoretically be years before all those over 18 get their second doses. And this doesn’t even include children on whom trials in India have only recently been approved.

The Health Ministry said on Sunday that close to 8 crore doses were available in May (counting wastage and stocks with States) and that 12 crore will be available in June for the Centre, States and private hospitals.

India hit a highpoint of administering 45 lakh doses a day on April 5 after which the pace has declined. Even at 20-30 lakh doses a day now, it’s only ahead of China in the number of daily doses being administered. The latter claims to administer 15 million doses everyday.

Experts say that India has the capacity to administer 100 lakh shots a day and can draw from its experience of the childhood immunisation programme, provided the supply of vaccines is not a constraint. That works out to about 25-30 crore vaccines being supplied a month.

“Drawing on our capacity of at least a 1,50,000 support staff (Auxiliary Nursing Midwife), we have been able to administer polio drops to at least 30 million children within days,” said Sujatha Rao, former Health Secretary. “However the problem we face [with COVID vaccines] is that there isn’t certainty on the supply.”

Bharat Biotech, the makers of Covaxin, has said that it took four months for a batch of vaccines produced to be made ready for supply.

“Vaccine makers are changing supply estimates every month and because they are differently priced and States are procuring on their own, it hampers distribution,” Ms Rao said.

Dr. Chandrakant Lahariya, epidemiologist and former consultant to the World Health Organisation said that until at least October there would be supply constraints. “It would be quite likely that India would move to a single shot vaccine administration policy. 100 lakh a day is doable, but we also have to account for people’s receptiveness in the future.”

He added that experience with childhood immunisation had shown that vaccine coverage was rarely 100% even if everyone eligible was willing to get themselves inoculated.

A steady inoculation of 50-70 lakh doses a day, he said, could be done without compromising on other healthcare programmes.

Dr Jayprakash Muliyil, who’s a member of the Centre’s committee on recommending an appropriate vaccination schedule said the second wave had conferred a ‘significant’ degree of ‘community immunity’ and that even a single shot of vaccine would confer significant protection.