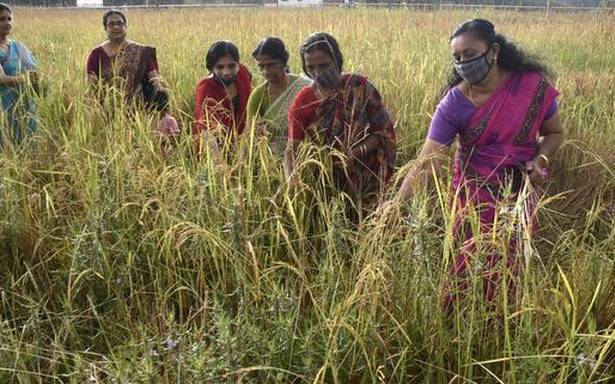 Farming was taken up by Kozhikode Corpn. foreseeing food scarcity in pandemic times

The Kozhikode Corporation is harvesting its crops under the Subhiksha Keralam project.

A week after harvesting tapioca from the Kerala Water Authority compound near Sarovaram Bio Park, paddy cultivated in 5 acres at Kannadikkal was harvested on Wednesday.

The corporation had started cultivation of tapioca, paddy, ginger, and turmeric, besides yam and other vegetables in 85 acres across the city, of which the crop in 24 acres is ready for harvest now.

Farming activities were initiated foreseeing food scarcity during the pandemic times. Vacant plots were identified in almost every ward, and farming was promoted either through the Kudumbashree or other farming groups.

As part of the initiative, organic manure produced at Njeliyanparamba was distributed among farmers at just ₹2 per kg.