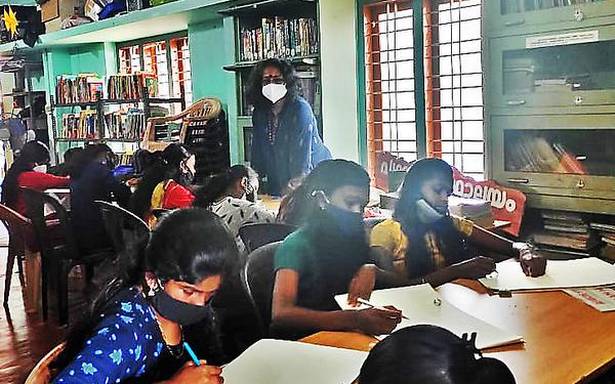 A two-day painting workshop for tribal children, being organised jointly by the University of Lincoln, U.K., and Kerala Development and Innovation Strategy Council, began at the Pazhassi public library, Mananthavady, in the district on Thursday.

The programme is being organised as a part of the “Tribal Education Methodology Project” of the varsity that envisages enriching education with cultural elements of the tribal communities, project manager P.E .Usha said.

As many as 10 selected tribal children are attending the programme. A team of the Kerala Mahila Samakhya Society, led by V.D. Ambika, district coordinator, Wayanad, selected the participants from various tribal settlements in Mananthavady taluk for the programme. Sajitha Shankar, a Thiruvananthapuram-based painter, is the trainer of the workshop.

This is the third workshop in the series and it will conclude on Friday.

As many as 30 tribal students were trained under the project so far, Ms. Usha said.

Wayanad District Police Chief Aravind Sukumar and District Medical Officer R. Renuka will hand over certificates to the participants at the valedictory function.