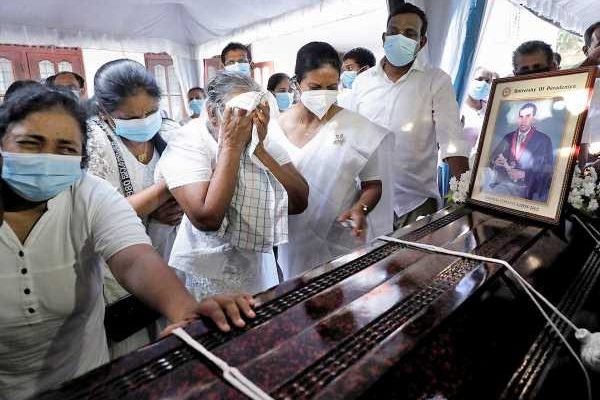 An anti-terrorism court in Pakistan’s Punjab province on Monday sentenced six people to death and nine others to life imprisonment for their involvement in the lynching of a Sri Lankan national over alleged blasphemy.

The judge, who held the trial proceedings in-camera inside the high-security Kot Lakhpat Jail here on a day-to-day basis, sentenced one accused — Ali Asghar — to 5 years in jail while acquitted another suspect — identified as Bilal.

A mob of over 800 men including supporters of radical Islamist party Tehreek-e-Labbaik Pakistan allegedly attacked a garment factory and lynched its general manager Priyantha Kumara, 47, and burned his body over allegations of blasphemy on December 3, in Sialkot district, some 100 kms from provincial capital Lahore.

The incident saw widespread outrage and condemnation across Pakistan with politicians, scholars and civil society members calling for swift punishment to be meted out to the perpetrators.

“Of the total 89 suspects, the ATC today announced its verdict handing down death sentence to six, life imprisonment to nine and two years jail term each to remaining 72 accused for their involvement in lynching and burning the Sri Lankan national,” a court official said in a statement issued to the media.

The judge also instructed the six prime suspects, who were sentenced to death, to pay Rs. 2,00,000 as compensation to the legal heirs of the deceased.

The nine accused who were given life imprisonment will have to pay a fine of Rs 2,00,000/- each and Rs 2,00,000/-compensation to the legal heirs of the deceased.

The court official said that total 46 prosecution witnesses had recorded their statements against the suspects.

The prosecution had sought death penalty for 80 suspects.

The suspects had denied the charges of their involvement in the crime.

Kumara was working as general manager in the Rajko industries (dealing in garments – sportswear) in Sialkot district for the last seven years or so.

Some factory employees had accused Kumara of tearing a poster of TLP inscribed with Islamic verses during his inspection of machines in the factory after which the mob dragged him out of the factory, brutally beat him and killed him before setting the body on fire.

After Kumara’s murder, some 200 suspects were taken into custody. However, over 100 of them were subsequently released after no evidence of their involvement in the incident was found.

The local business community had handed over a donation of USD 100,000 to Kumara’s wife and the factory owner had promised to give the victim’s salary of USD 1,650 to his family every month.

Kumara had gone to Pakistan in 2011 after he got a job as a mechanical engineer at an apparel factory in Faisalabad. After a year, he joined Sialkot’s Rajco Industries as its general manager and was the only Sri Lankan national working in the factory.

The Sri Lankan Parliament, President Gotabaya Rajapaksa and Prime Minister Mahinda Rajapaksa had condemned the brutal killing and expressed hope that the Pakistan government would bring the guilty to justice.

Pakistan has extremely strict blasphemy laws against defaming Islam, including the death penalty, and rights campaigners say they are often used to settle scores in the Muslim majority country.