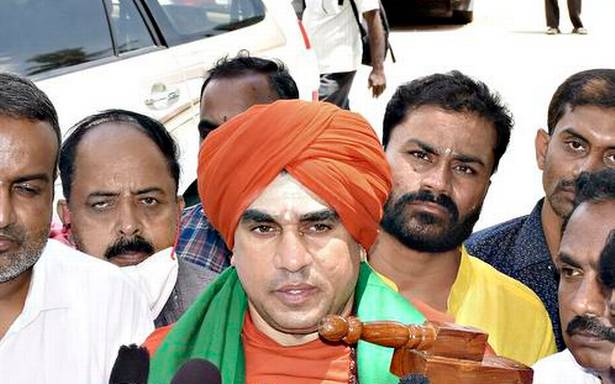 The seer of Lingayat Panchamasali Peetha Jayamruthyunjaya Swami has threatened to revive their agitation for reservation if the State government does keep its word.

“We took out a padayatra of 712 kms over 39 days before holding a dharna for more than 21 days in Bengaluru’s Freedom Park earlier this year,” he said and warned of mobilising a larger crowd in the State capital if the government did not keep its promise.

He also claimed that the BJP suffered a setback in the recent elections in Belagavi and Maski because the party government had ignored the demands of the Panchamasalis.

The Swami, who said reservations in education and jobs are more important for the uplift of the community, said BJP MLA Basanagouda Patil Yatnal had spoken about the community’s interests in the Legislative Assembly.

When his opinion was sought on the campaign for change of leadership in the State and whether their demand will receive attention at such a juncture, the Swami said it was appropriate to ‘strike when the iron is hot’. However, he said he was neutral on the issue of change of leadership. “But, in the event of a change, a Lingayat from North Karnataka should be given the opportunity. For, the community has capable leaders”, he said.