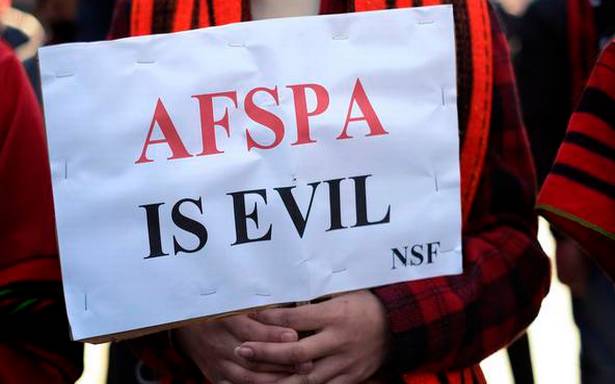 Days after a botched ambush by an elite armed forces unit killed 13 civilians at Oting in Nagaland’s Mon district, a decision has been taken to constitute a committee to study the possibility of withdrawing the Armed Forces (Special Powers) Act (AFSPA) from the State.

The Act is said to give the armed forces personnel the license to kill.

The committee will be headed by the Additional Secretary (Northeast) in the Ministry of Home Affairs and will include Nagaland’s Chief Secretary and Director-General of Police.

The decision to form the panel was made during Home Minister Amit Shah’s meeting with Mr. Rio, Mr. Patton and Mr. Zeliang along with Assam Chief Minister Himanta Biswa Sarma in New Delhi on December 23.

The statement said the committee would submit its report within 45 days. The withdrawal of the “disturbed area” notification and the AFSPA from Nagaland will be based on the recommendations of the committee, it added.

“A court of enquiry will initiate disciplinary proceedings against the Army unit and Army personnel, who are directly involved in the Oting incident and action will be taken immediately on the basis of fair enquiry. The identified persons who will face the enquiry will be placed under suspension with immediate effect,” the statement said.

It said the State government would provide jobs to the next of kin of the deceased and to initiate this process, the Deputy Commissioner and the Superintendent of Police of Mon district would carry out necessary procedures in consultations with the village councils concerned.

Government jobs will be given on compassionate grounds on the basis of eligibility. The Nagaland delegation requested Mr. Shah to replace the Assam Rifles unit in Mon with immediate effect, the statement said.

The Nagaland government lauded Mr. Shah for taking the matter with utmost seriousness and the Government of India for taking the required steps to ensure justice and also for positively responding to the voice of the people.

The State government appealed to all sections to remain calm and continue to maintain a peaceful atmosphere.

“The democratic and peaceful nature of the civil society groups, tribal hohos (apex community-based body) and mass-based organisations in our collective quest for justice and truth has been well received and has created a positive image of the Naga people to the rest of the global community,” the statement said.