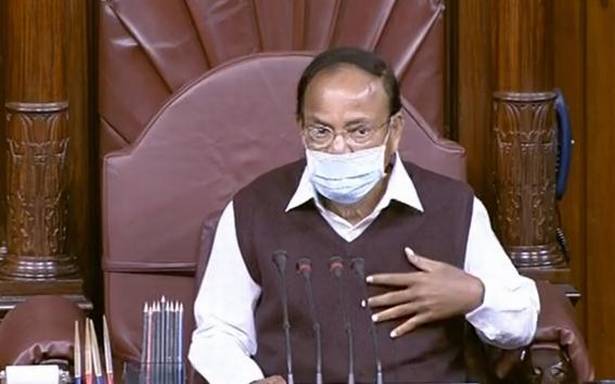 On the first day of the second part of the Budget Session, Venkaiah Naidu said that he has been told that some members do not attend the proceedings even when they are in the national capital

Rajya Sabha Chairman M. Venkaiah Naidu on March 8 said that members should make it a point to be present in the House to enhance understanding of parliamentary procedures and also use the library facility.

On the first day of the second part of the Budget Session, Mr. Naidu said that he has been told that some members do not attend the proceedings even when they are in the national capital.

“Going to library is going to enhance your knowledge. Attending the session, not missing it, also enhances understanding of Parliament procedures. So I call upon members to please visit [Parliament] library, make use of the library….and also please attend Parliament,” he said.

He further said, “I am told they are in Delhi but they are not present in the House.”

He, however, made it clear that he was not referring to any particular member or any party.

“I appeal to all the members, please make it a point to be in the House and then observe debates, enrich your knowledge,” he said.

The Parliament library is completing 100 years this year. It has a huge collection of about 14 lakh books including hundreds of journals in all languages.

“I am told that the footfall of Members of Parliament in this source of information and knowledge is not very encouraging,” Mr. Naidu said, stressing that sufficient homework is required on the part of members to make quality contribution to debates and interventions.

Mr. Naidu also gave an account of the examination of the Demands for Grants for 2021-22 of various Ministries undertaken by the eight Department-Related Parliamentary Standing Committees of the Rajya Sabha during the 3 week-recess after the first part of the ongoing Budget session of Parliament.

He referred to several positives that emerged during the Budget scrutiny by the Committees of the Rajya Sabha and some concerns as well.

Mr. Naidu, however, expressed concern over low attendance of members of non-BJP and non-Congress parties in the meetings held for scrutiny of Demands for Grants.

The chairman also noted that the new Leader of Opposition in the Rajya Sabha Mallikarjun Kharge is one of the long serving leaders of our country with vast legislative and administrative experience having been member of the Karnataka Legislative Assembly for a record 9 times without a break and twice member of the Lok Sabha.

Mr. Kharge was also the Leader of the Opposition in the State Assembly twice besides being the leader of the largest Opposition party in the Lok Sabha.