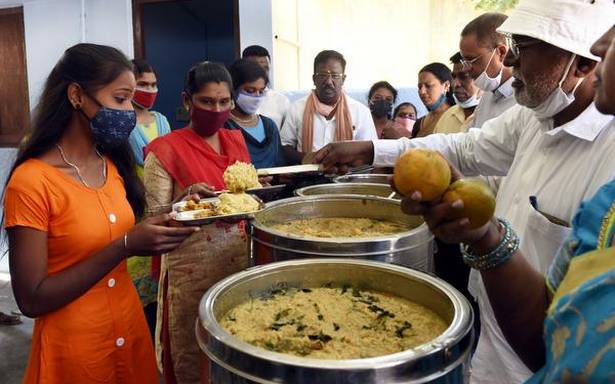 The Parliamentary Standing Committee on Education has recommended that all government schools start providing free breakfast in the coming academic year, as part of an expansion of the mid-day meal scheme envisaged by the National Education Policy. However, Education Ministry officials say a severe funding crunch is likely to delay the initiative.

Free breakfasts would involve an additional budget of ₹4,000 crore, according to senior officials, but the School Education Department has seen a budget cut of almost ₹5000 crore this year.

In its submission to the panel, the Department said it had proposed two new components to the mid-day meal scheme during 2021-22. One, an expansion of coverage from the current Class 1-8 students, to include pre-primary students as well, and two, the provision of breakfast.

“The Department in its written submission also informed that a number of States have started providing breakfast to the students in the mid-day meal scheme. The Committee recommends that under the schemes all schools should start providing breakfast [for] the students in the next academic session as envisaged in NEP, 2020,” said the panel’s report, submitted to the Lok Sabha on Tuesday.

“The Centre’s current expenditure on the scheme is about ₹11,000 crore for 11.8 crore students. We were hoping to start providing breakfast from April when the new session starts, but we estimate it will cost us another ₹4,000 crore. There have been major budget cuts, so the plan has been delayed by several months now,” said a senior Ministry official.

The School Education Department saw an 8% cut in allocation from the 2020-21 budget estimate of ₹59,845 crore to ₹54,873 crore in the coming year. The Department’s revised estimates for last year were lower as schools were shut to prevent COVID-19 spread for more than nine months, but the mid-day meal scheme was one of the few to see expenditure rise during the pandemic.

“Students were given dry ration or DBT [that is, a cash allowance] in lieu of mid-day meals. Plus, the scheme remained open through the summer holidays as well. So our expenditure was higher than usual,” said the official. The Central allocation for the meals had a budget estimate of ₹11,000 crore in 2020-21, and a revised estimate of ₹12,900 crore. However, the 2020-21 budget estimate was slashed back down to ₹11,500 crore, which is insufficient to provide breakfast, let alone expand coverage to include younger children.

Officials say depending on the economic situation and the Centre’s revenue position, the proposal could be re-examined later in the year. The States’ finances may also come into play, as the Centre bears the entire cost of foodgrains, but shares the cost of food preparation and distribution with them.