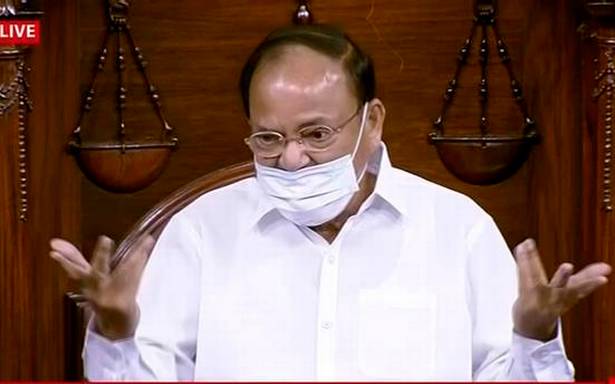 Expressing deep anguish over some opposition MPs climbing on the table in the House, Rajya Sabha Chairman M Venkaiah Naidu on August 11 said he couldn’t sleep because of the sacrilege in the "temple of democracy". Referring to August 10 events, Mr. Naidu said he struggled to find a provocation or reason for the low in the "august House".

Parliament, the apex legislature of the country is regarded as the "temple of democracy", he said.

The table area where the officers and reporters of the House, the Secretary General and the Presiding Officer are seated is considered the holy sanctum sanctorum of the House, an emotional Mr. Naidu said as the Rajya Sabha assembled for the day.

"I rise in deep anguish to place on record the way this august House is being subjected to sacrilege and that too propelled by a sense of competition among some sections of the House since the commencement of this monsoon session," the Rajya Sabha chairman said.

There were ugly scenes in the Rajya Sabha on August 10 as Opposition MPs climbed on the officials’ table, waved black cloth and threw files when the House began a discussion on the farmers’ protest against new reform laws.

Several MPs stood on the table where the parliamentary staff sits right below the chair, while others crowded around it shouting anti-government slogans.

A few members squatted on the table for over one-and-half hours during which proceedings were adjourned multiple times.

No sooner was a discussion on the farmers’ issues called, MPs belonging to Opposition parties including the Indian National Congress (INC) and the Trinamool Congress (TMC) trooped into the Well shouting slogans seeking withdrawal of the controversial farm reform legislations.

According to Mr. Naidu, a certain degree of sacredness is attached to the place. In temples, devotees are allowed only up to the sanctum sanctorum and not beyond, he said, adding that entering the area is itself an act of sacrilege.

"I am distressed by the way this sacredness has been destroyed yesterday." While some members sat on the table, others climbed on it, perhaps to be more visible, he said.

"I have no words to convey my anguish and to condemn such acts. As I spent a sleepless night last night, I struggled to find the provocation or reason for forcing this august House to hit such a low yesterday," he said.

Mr. Naidu said a discussion on ‘agricultural problems and solutions’ was listed for discussion on August 10, further to a broad agreement in the House to discuss the plight of farmers.

While the Chairman was making the remarks, several opposition members entered the Well to raise slogans on different issues.

However, Naidu continued making his observations amid the uproar.

Over the years, when ‘Notices of Motions’ of different kind are admitted by the Chair, the language to be used in the ‘List of Business’ is drafted in such a way that it is acceptable to all sections of the House without denting the thrust of the issue to be discussed. It happened yesterday too, he said.

"I find it difficult to understand as to how the way the subject was listed in the List of Business for yesterday would have prevented any member to raise any issue concerning the farm sector, including the three farm Bills that some members were keen to raise in the House and even demanding their withdrawal," Mr. Naidu said.

August 10, he added, was a golden opportunity for members to have gone on record with their positions on all issues relating to the plight of the famers. But it was not to be as the sole intention seemed to be to not allow the House to function.

On August 10, when the Chair announced a discussion on farmers’ issues, Congress chief whip Jairam Ramesh cited a ruling by the Chair in 2015 and said his notice for calling attention motion was converted into a short duration discussion without taking the sense of the House. This, he said, was a unilateral decision.

Mr. Naidu also expressed his concern at some MPs shooting the "sad moments of sacrilege" in the House and posting them on social media.

While doing so, they only ended up showing to the people the extent to which the House could degenerate to due to the new found competitive and aggressive disruption by some sections, he said.

"It was very sad indeed. I am deeply anguished and so must be the nation and well wishers of our parliamentary democracy," Mr. Naidu observed. As Chairman of the House, he said he was "scared to visualise the implications and consequences of such competitive acts of sacrilege in our temple of democracy".

Naidu asked the members to seriously reflect on what happened on August 10 and explore remedies if any.

Failure to do so would certainly render our parliamentary democracy irrelevant.

"I would like to remind all of you that we begin to celebrate the 75th year of our independence in a few days from now. The choice before each one of you is very clear. It is either to be the best parliamentarian or the worst disruptor," he added.

Mr. Naidu also said that "some people" had complained that Rajya Sabha TV did not broadcast what happened in the House on Tuesday.

"I don’t know why Rajya Sabha TV not showing. This also can be shown. I have no problem," he said.

As opposition members kept raising slogans, the proceedings were adjourned till 12 noon.