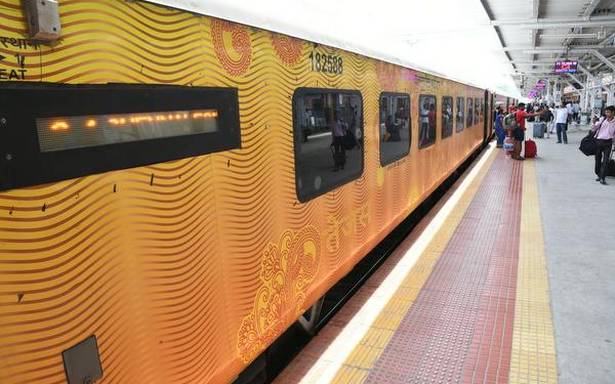 A section of passengers travelling in Tejas Express complained of lack of drinking water, beverages and snacks.

The train was re-introduced on January 10 after cancellation due to poor patronage. The passengers said that they were put to lot of sufferings on the first train that left Chennai Egmore on Sunday.

“The train leaves Chennai Egmore early in the morning at 6 a.m. People have neither time to cook breakfast or buy food or water bottle as even hotels are not opened at that time,” complained J. Jerin (34) of Nagercoil.

Onboard railway employees claimed that distribution of food and water had been stopped after a passenger complained about it.

Mr. Jerin said many passengers who failed to bring water had to suffer till the train reached Tiruchi. “The worst part is that the train arrived Tiruchi station with a delay of an hour.”

Some of the passengers had pleaded with the travelling ticket examiners to make the halt for additional five minutes so that everyone could buy water and food. He complained that even toilets were not maintained properly in the premium train.

“But, claiming that the train was already running behind the schedule, the TTE refused,” said another passenger, A. Ramachandran (62) of Theni.

Besides, elderly people found it difficult to buy food and water as the train stops for a brief while at the station.

Mr. Ramachandran said that the online ticket itself had made a mention that no food would be supplied with the ticket. However, water bottle, coffee/tea, snacks and food packets that were sold in the train earlier were missing on Sunday.

However, a railway official here said that Indian Railway Catering and Tourism Corporation that operates the train could not make arrangement for the water and food immediately as operation of the train was announced all of a sudden.

Onboard sale of water bottles, coffee, snacks and noodles resumed on Tuesday, he added.