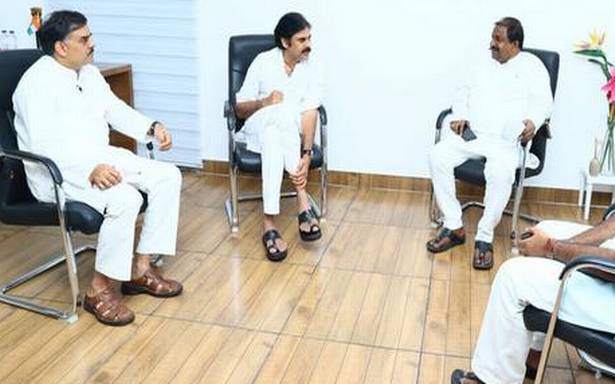 JSP ‘likely’ to field its candidate in the fray

Jana Sena Party (JSP) president Pawan Kalyan and BJP State president Somu Veerraju met at the JSP office, near Mangalagiri, on Thursday and discussed the latest political developments, mainly the strategy to be adopted by them for the by-election to the Badvel Assembly constituency.

JSP political affairs committee chairman Nadendla Manohar and BJP leader Madhukar were present during the deliberations that reportedly focussed on the ways to intensify the protests against the State government’s “anti-people policies.”

The Badvel by-election will be a major test for the alliance that suffered a rout in the by-election to the Tirupati Lok Sabha seat.

The alliance seems to have gained some strength since then going by their relatively better performance in the ZPTC and MPTC elections, though it pales in comparison with the ruling YSRCP’s emphatic win.

The outcome of the discussions is kept under wraps amidst speculation that the BJP has agreed to let the JSP field its candidate as part of their mutual understanding.