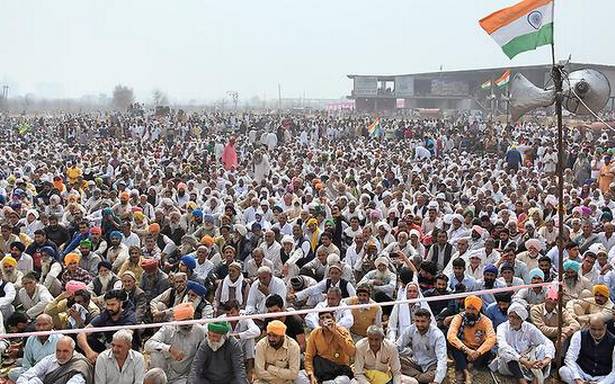 Bharatiya Kisan Union leader Rakesh Tikait on Friday said the farmer unions aimed to connect 40 lakh tractors with the ongoing agitation and hold meetings across the country to mobilise more people in support of their demands for repeal of three laws and legal guarantee for the Minimum Support Price.

Speaking at a “Sarv Khap Mahapanchayat” organised by Dalal Khap 84 at Jhajjar’s Bahadurgarh, Mr. Tikait alleged that people from Gujarat were not being allowed to take part in the farmers agitation. He claimed that around 120 people in Gujarat were in jails and there was a need to fight for the freedom of the people in Gujarat. “India has attained freedom, but the people of Gujarat are not free as yet,” Mr. Tikait said.

He called upon the people to be prepared to march to Delhi if required.

Mr. Tikait said the Red Fort incident was a conspiracy to target a community and the farmers alleging insult to the Tricolour. Without naming anyone, Mr. Tikait said that a “boy” was misled to issue a statement an evening before the tractor parade and the next morning he was at Red Fort. “How did he reach there?” asked the farmer leader.

Mr. Tikait said there was no need for the farmers to go to the Red Fort as laws were not made there. “The police put barricades on the route agreed upon for the tractor parade, but the roads leading to Red Fort were left free,” he said. Mr. Tikait said it was a conspiracy to demoralise the farmers and send them back homes.

He called upon the farmers to write ‘Kisan Kranti Yatra 26 January 2021’ on their tractor-trolleys and be part of the movement. “We will go back homes, only after the laws are taken back,” said Mr. Tikait. He added that farmers won’t allow business over hunger.

Mr. Tikait also coined a new slogan saying that the hands that plough the land would not beg for their rights. He alleged that a campaign was being run through IT cell to spread rumours about the movement and target its leaders.

BKU (Charuni) president Gurnam Singh Charuni said the agitation was the battle for the economic freedom of the farmers.

Supported by the khaps across Haryana, the mahapanchayat saw a huge participation of farmers, including women and youth. Several leaders of the 40-member committee holding talks with the government on the farm laws were present.