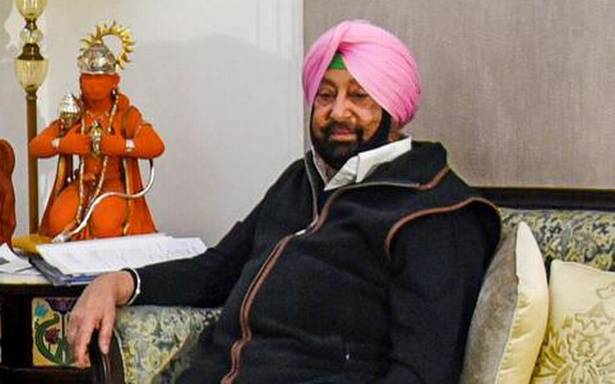 Ahead of Assembly polls a little more than a month away, former Chief Minister and chief of the nascent Punjab Lok Congress Amarinder Singh, who has allied with the BJP and Shiromani Akali Dal (Sanyukt), is confident the people of Punjab will vote for his alliance because people identify more with the leader than with the party. “It is the leader who has to own up whatever it is, success or failure,” he says, dismissing any challenge from the Congress, SAD or AAP. Excerpts:

What would be your party’s key agenda to seek votes in the upcoming Assembly polls?

I have already spelt out that national security and revival of Punjab’s economy will be our top most priorities. Punjab is a border State, bordering a perpetually hostile neighbour, Pakistan. Pakistan and its deep state will never rest and they are in continuous pursuit of creating trouble and turmoil in Punjab. They are sending across the weapons using sophisticated technology. Recently our security personnel found a Pakistani boat in the Satluj river. These are all ominous signs. Plus, there are anti-India propagandists being supported and patronized by the ISI.

Second, the economy. Punjab has a cumulative debt burden of about ₹5 lakh crore. How will you repay that? It is a vicious cycle we will have to get out of and it is a tall order. And for all this, we need complete peace, as peace is the prerequisite for progress and prosperity.

You have been claiming that once the Code of Conduct is in place, several Congress leaders will join you. When can we expect that to happen? Can you share the number of such leaders?

Wait and watch. I can’t tell you the specific numbers. We are in regular touch with not only Congress leaders and legislators, but those from other parties as well. You will get to know very soon. The time has come.

You are fighting polls in alliance with the BJP. [but] the farmers have been angry with the BJP over three farm laws, which were eventually repealed. Do you think the anger will mellow down?

Of course, the farmers have mellowed down. Their main demand was repealing three laws, which stand repealed. There is already a committee in place to look into the issue of legal guarantee for the Minimum Support Price (MSP). The Prime Minister has shown magnanimity and I am sure the farmers will also reciprocate.

How do you react to farmers’ protest in the backdrop of Prime Minister Narendra Modi’s recent Ferozepur rally and the ‘security lapse’?

It was a grave security lapse. It was not actually the farmers’ protest. It was a State government sponsored protest and disruption. They were quite wary of the Prime Minister’s Ferozepur rally fearing that this will build up our campaign. They asked the police to block the way of people coming to the rally. The same way they tried to disrupt the Prime Minister’s cavalcade. They are lying when they say there was no security threat to the Prime Minister.

You remember how some mischievous people almost lynched a BJP MLA from Abohar Arun Narang or the Congress MP Ravneet Bittu. It is good that the Prime Minister’s cavalcade stopped at a distance. Otherwise, the worst might have happened.

The Congress and other opposition parties accuse you of being hand-in-glove with Badals and hence not acting against former Minister Bikram Singh Majithia in the drugs related case. After your removal from CM post, the Channi government has filed an FIR against Mr. Majithia. What do you have to say?

Just because they have nothing against me, they are saying, I was hand-in-glove with the Badals. Because, it does not cost them anything to say that. Anyway, I really don’t care.

Regarding Majithia’s case, there was an investigation carried out by the Special Task Force. The investigation report is pending in a closed envelope in the Punjab and Haryana High Court. Till the time you don’t open it, how do you know how a case can be made against Majithia, or for that matter anyone else? Justice should not only be done, it should seem to have been done. Just because they would say I am hand-in-glove with ‘Badals’, does not mean I would have jumped the due process of law to appease them. Law of this country does not work according to the whims and fancies of anyone. There is a due process that has to be followed.

Which according to you is a greater challenge for your alliance in the poll — the Congress, the Shiromani Akali Dal-BSP or the Aam Aadmi Party? Also, what do you think would be the political fallout of 22 farmers unions contesting the polls?

Honestly, I do not see any contest with anyone. I will tell you why. Take the Congress. It is in a state of continuous civil war. The Punjab Congress president Navjot Singh Sidhu cannot see eye-to-eye with the Chief Minister Charanjit Singh Channi. The PCC President is behaving like a pampered child putting forth one demand after another and he will never be satisfied. Now he wants himself to be declared as the Chief Ministerial candidate. If the Congress does that, it loses the strong Scheduled Caste (SC) vote base and if it does not, Sidhu will run away.

Akalis are nowhere in the picture. People have not forgiven them for the way they handled the sacrilege cases and the subsequent protests by people. I don’t see them reaching even the last time figure of 13 or so.

The AAP bubble was blasted in the 2019 parliamentary elections. Their vote share tumbled down to a mere 7% from 25% in 2017. They may not even cross double figure mark this time.

Farmers, if they contest, will lose credibility as the majority of their leadership is opposed to participating in elections. Moreover, they had maintained an apolitical character all through the agitation. If and when they join the electoral process, they will face tough questions.

You have been claiming that as the Congress Chief Minister you fulfilled around 90% of election promises of Congress party. If that is the case then why should people not vote for the Congress again in the upcoming polls?

People identify more with the leader than with the party. It is no longer the same Congress that I headed. Navjot Singh Sidhu has been in the party for not even five years and Mr. Channi joined the party in 2012. They cannot claim the credit. It is the leader who has to own up whatever it is, success or failure.

By when is your alliance expected to announce the candidates? What would be the seat arrangement among alliance partners?

We have held a few rounds of talks already. This is an ongoing process. I have said it many times, numbers do not matter for us as who contests how many. Our sole criterion is winnability of the candidates no matter which party he/she may be from, whether PLC, the BJP or the Shiromani Akali Dal (Sankyukt).