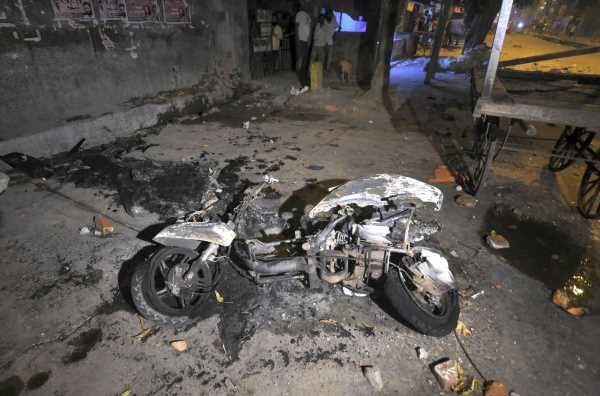 It was terrifying as mobs brandishing weapons clashed, hurled stones and fired shots, said residents of Jahangirpuri’s C-block as they recalled the violence during a Hanuman Jayanti procession, which left nine people, mostly policemen, injured and many vehicles damaged.

Hindus and Muslims live here in harmony, and the Saturday clash came as a shock. There has never been such a situation in this area, they said.

Residents on Sunday largely stayed indoors while there was heavy police deployment in C-Block, the epicentre of the communal violence, and around a mosque in that area.

Everything was peaceful when two Hanuman Jayanti processions passed the area in the morning. It was during the evening procession, around 6:15 pm, when the violence broke out after “I heard people screaming ‘they are entering the mosque'”, said Mohammad Aquib.

“I was terrified to see the situation and rushed to shut my shop. I was worried for my wife and four children as I could see people pelting stones at each other. I also had thought of leaving the area,” he said.

Iftar never happened on time and “we were so scared that we broke our fast at 2 am (Sunday),” said Jahangirpuri resident, who lives near the mosque.

Manoj Middya, a shopkeeper and a resident of C-Block, said, “I rushed home after shutting my shop.”

“I have been living in the area since many years and I have never seen this kind of violence. My neighbours are Muslims, but we have never faced any communal problems. We have all been living in harmony,” he said.

The Delhi Police has arrested 20 people over the violence, including the “main conspirators” behind the clashes and held meetings with peace committees to cool tensions as anti-riot personnel patrolled the streets and drones were deployed to thwart any untoward incident.

“It (the third) was a huge procession, with people brandishing weapons and I could only see two policemen there. This is negligence on the part of authorities,” Aquib said, claiming that there were 600 to 700 people in it.

In the violence, he said his scooter suffered minor damages and claimed cycles and equipment kept outside his shop were stolen.

“There is a Kali Temple here and my neighbours are Hindus. We have never faced any problems. We’ve been living here peacefully,” Aquib said, blaming authorities of negligence.

Fourteen-year-old Faraz hid behind a wheelbarrow to escape the violence.

Scores of people rushed towards their houses, while others shut their shops as the clash broke out, she said.

“The situation here was completely chaotic. Then, I saw the Hanuman Jayanti procession. There were hundreds of people in the procession and they were carrying weapons like swords and pistols,” Faraz said.

Sheikh Amzad, a resident of C-Block, said that he was inside the mosque when the violence took place on Saturday evening.

“We were were reading namaz when the procession gathered outside and started screaming ‘Maaro inn gaddaro ko’. We were just doing our usual Ramzan rituals, what is wrong in that? Does reading namaz makes one a traitor?” he asked.

Another shopkeeper, Manoj Kumar said that he was at his shop when the incident took place.

“When I saw people rushing to their homes, even I had to shut my shop and rush inside. This (clash) went on for two hours. I have seen verbal altercations between communities, but never witnessed violence of this kind in this area before,” he said.

Senior police officials said that right now the situation is totally under control and the matter is being further investigated.

Several right-wing outfits, including the Vishwa Hindu Parishad, have alleged that as the procession was passing people from surrounding areas started gathering with sticks and batons. They started attacking and subsequently, stones were hurled which led to the violence, it claimed.