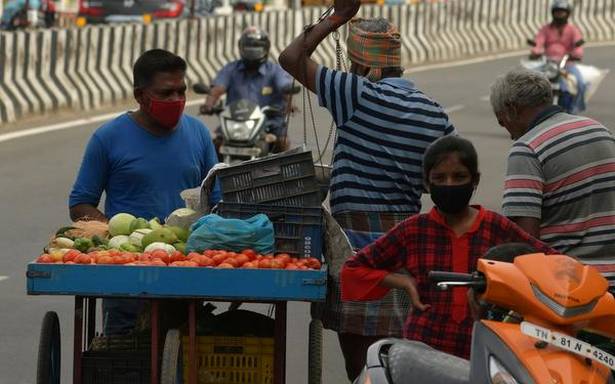 Sale of vegetables on wheels to be encouraged

As the need for decentralising the retail vegetable trading gains momentum to de-congest overcrowding on the West Boulevard Road, where the wholesale and retail operations of the Gandhi Market were shifted a few days ago, the district administration mulls a strategy to set up temporary markets at different locations and to encourage sale of vegetables on wheels.

It was with the aim of preventing overcrowding, the district administration shifted the entire operations of the Gandhi Market to West Boulevard Road a few days. The officials of the Tiruchi City Corporation had to make a number of home works to convince the reluctant traders. As per the arrangements, the wholesale traders would occupy the road from dusk to dawn and the retail traders would carry out business from 6 am to 10 am.

However, the officials have noted that there has been no notable impact in crowd management on West Boulevard Road too. Since the timing of retail trading is limited, the customers throng in large number to buy vegetable and fruits. No one seems to be following the social distancing norms of the State government. The officials feel that except the traders do business in the open, which is of course is said to be a safe method to check the spread of COVID-19 virus than the closed environment at the Gandhi Market.

While a section of residents is in favour of decentralising the retail trade at different locations as it was done during the first wave of COVID-19, the State government’s Saturday decision to impose a total lockdown for a week and to organise vegetable supply to households has added a new dimension to the market issue in Tiruchi. A clear picture is likely to emerge on the modalities of supplying or selling vegetables to households after the video conferencing by Chief Minister with the Collectors on Sunday.

Collector S. Sivarasu told The Hindu that a detailed consultation was on with various stakeholders. The decision would on the line of the State government. It should be a win-win situation for traders and the people. Moreover, it should effectively check the spread of the virus.