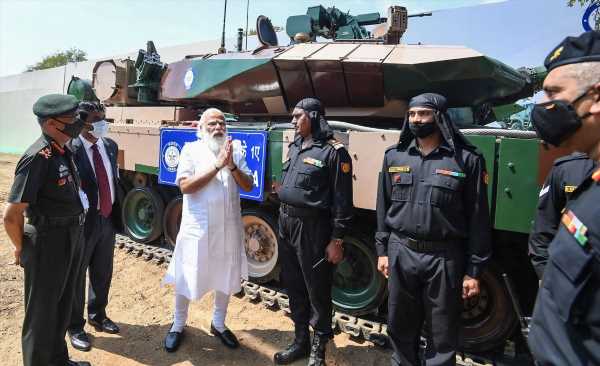 Fifteen academic institutions, eight labs, and several micro, small and medium enterprises also helped in making of the tank, which has 71 new features.

“The tank made in Tamil Nadu will be used to protect northern borders. This is another testimony of the Atmanirbhar Bharat, going in full force in the defence sector showcasing Bharat Ekta Darshan,” the PM said.

Orders for 118 tanks worth around Rs 8,500 crore have been placed, which will support 200 industries and will create 8,000 jobs. “Chennai is an auto hub, and it will become a hub for battle tanks, said Modi, adding that the defence corridor in Tamil Nadu had already attracted around Rs 8,100 crore investment.

“Today we witness the second anniversary of Pulwama attack. We are proud of our security forces,” said Modi. The army, he said, has time and again shown that they are capable of protecting the motherland and India’s belief in peace. It has also shown that India will protect its sovereignty at all costs, he said.

The PM said “this is going to be India’s decade. The government is committed to doing everything possible to support this search of aspiration and inspiration”. “We will continue working to make our armed forces one of the most modern forces in the world. At the same time, the focus on making India self-reliant in the defence sector moves with full speed,” said Modi. He inaugurated various projects worth over Rs 4,487 crore and laid the foundation stone for projects worth Rs 3,640 crore in the state.

The prime minister also inaugurated the Chennai Metro Rail Phase-I extension, and dubbed it another testimony for Atmanirbhar Bharat. Despite the pandemic, the project was completed on time. Civil work and rolling stocks are completely indigenous.

The PM on Sunday dedicated to the nation a Rs 6,000-crore petrochemical complex of  Bharat Petroleum in Kochi and Ro-Ro vessels of Inland Waterways at Willingdon Islands, asserting these projects would energise India’s growth trajectory.