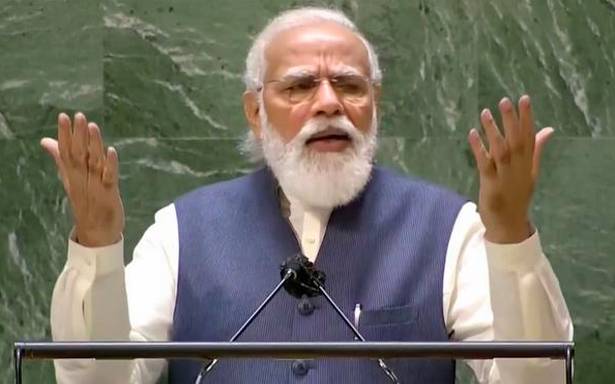 Noting that Mr Modi spoke on issues ranging from COVID-19 and vaccination to terrorism and maritime boundaries, Mr Nadda lauded him for working to bring the international community together

Lauding Prime Minister Narendra Modi’s address at the United Nations General Assembly on Saturday, the BJP said he spoke like a statesman and his speech has made the country proud.

BJP president JP Nadda said in a statement that Mr Modi had hoisted India’s ideological flag in the world and claimed that the attention that the international community pays to him shows that India has established itself as a major power under his leadership.

Mr Modi has only one goal, which is to make India "vishwa guru" again, he said.

Mr Nadda said that the prime minister voiced India’s views on a variety of issues strongly and drew the world’s attention towards global issues.

His address at the UNGA shows the path of inclusive development to the whole world, the BJP chief said.

Noting that Mr Modi spoke on issues ranging from COVID-19 and vaccination to terrorism and maritime boundaries, Mr Nadda lauded him for working to bring the international community together.

Modi has shown the world with his action as to how India has traversed the distance between "democracy can deliver" and "democracy has delivered", he said.

He also noted that Mr Modi also mentioned BJP ideologue Deendayal Upadhyay, whose birth anniversary fell on Saturday, and his principles at the global stage.

Mr Modi said on Saturday that countries with "regressive thinking" that are using terrorism as a "political tool" must understand that it is an "equally big threat" for them also, in a veiled attack on Pakistan which is accused by its neighbours of providing safe havens to terrorists.

Addressing the 76th UN General Assembly session here, Prime Minister Modi also called for ensuring that no country "tries to take advantage of the delicate situation in Afghanistan and use it for its own selfish interests."

Mourning the loss of lives lost due to the global coronavirus pandemic, he also reiterated India’s commitment to start giving vaccines to needy persons in other countries, even as he gave a clarion call to manufacturers to "Come, Make Vaccine in India".