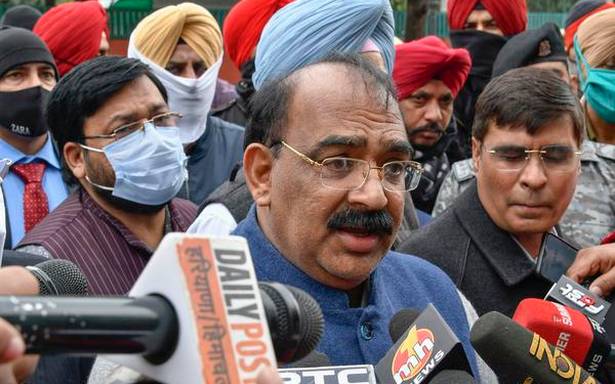 Punjab BJP leaders met the Governor in Chandigarh on Thursday, demanding the dismissal of the State’s Home Minister Sukhjinder Singh Randhawa and the police chief over the security breach during the Prime Minister’s visit to Punjab.

The opposition party also said it did not have any expectations from the committee set up by the State Government to probe Wednesday’s incident in which Prime Minister Narendra Modi’s convoy was stuck for several minutes on a flyover due to a farmers’ protest.

"We reject this committee. The Chief Minister is the conspirator of this conspiracy. What will this committee set up by his government do?" Punjab BJP president Ashwani Sharma told reporters after meeting Punjab Governor Banwarilal Purohit.

The Punjab overnment has constituted a two-member high level committee to conduct a "thorough probe" into lapses during the PM’s Wednesday trip to Punjab.

The PM’s convoy was stranded on a flyover in Ferozepur when it was 30 kms away from the National Martyrs Museum in Hussainiwala, where he was going, due to a blockade by protesters on Wednesday.

He returned from poll-bound Punjab without attending any event, or a rally. Former Punjab Minister Rana Gurmit Singh Sodhi, who switched over to BJP from Congress last month, said responsibility for the lapses lies with Punjab Government.

"It is not a small incident. A high-level probe should be held into entire incident," said Mr. Sodhi, who was part of the BJP delegation to meet Governor.

He said a central agency should probe the entire incident.

Mr. Sharma said it was the DGP and Chief Secretary who gave clearance to the PM’s convoy to take the road after the weather turned inclement in Bathinda, where the PM had landed.

According to an MHA statement issued on Wednesday, the PM was earlier scheduled to go Hussainiwala from Bathinda in a helicopter.

"The entire incident smacks of conspiracy and it appears everything was pre-planned," he alleged.

“This means this government through police department hatched the conspiracy to bring the Prime Minister’s cavalcade to a halt and this needs to be probed," Mr. Sharma alleged.

Asked if the state BJP has demanded Governor’s rule in the state, he said people have already rejected the Congress government.

"Congress, which earlier pushed the state in dark days of militancy, should stop doing conspiracy to burn Punjab to grind their political axe,” he said.

Mr. Sharma dismissed as ridiculous Punjab Chief Minister Charanjit Singh Channi’s statement in which he said he could not come to receive the PM in Bathinda because two of his staff officials were tested positive for COVID.

"If he chose that reason to stay away, then how did he call a press conference in Chandigarh on Wednesday evening? Does he not care about health of journalists? Did he get himself tested?" Mr. Sharma asked.

Mr. Sharma alleged a large number of buses and other vehicles carrying BJP workers were prevented from reaching the rally site.

He said 3,485 buses and 5,000 other vehicles from different parts carrying workers were reaching for the event.

He alleged the State Government was deliberately preventing the Prime Minister to inaugurate developmental projects worth thousands of crores, as it feared the BJP will gain public support.

The Union Home Ministry on Wednesday directed the State Government to file a detailed on the security breach.

Home Minister Amit Shah said such dereliction of the security procedure during the Prime Minister’s visit was totally unacceptable and accountability will be fixed.

Mr. Channi has denied any security lapse or political motive behind it and said his government is ready for an inquiry.

The incident triggered a major political row with the BJP alleging that the ruling Congress in Punjab "tried to physically harm" the Prime Minister, while other parties too attacked the State Government over the law and order issue.