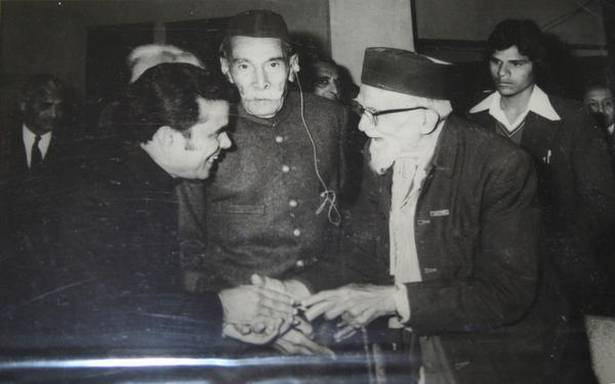 While the BJP is seeing the visit as honouring a freedom fighter who was ignored during the Congress rule, the Opposition sees it as an attempt of the BJP to appropriate an icon who is outside the Sangh universe.

The Prime Minister’s visit to Aligarh to lay the foundation stone of Raja Mahendra Pratap Singh University is being seen in the light of the upcoming Assembly elections as it is not every day that the PM goes to lay the stone of a State university.

Naming the university after the ‘Jat king’, observers feel, is as an attempt by the BJP to win over Jat farmers who have been at the forefront of the protests against the contentious farm laws.

Being held days after the Muzaffarnagar mahapanchayat, the local unit of the party is seeing the event as a show of strength in the region that has a large population of Jat farmers.

While the BJP is seeing it as the fulfillment of a long-standing demand and honouring a freedom fighter who was ignored during the Congress rule, the Opposition sees it as yet another attempt of the BJP to appropriate an icon who is outside the Sangh universe.

They remind that their newly found icon defeated Jan Sangh candidate Atal Bihari Vajpayee in the second general elections when Mahendra Pratap stood as an independent from Mathura.

Born in the ruling Jat family of Mursan estate in Hathras, Mahendra Pratap was an alumnus of Mohammedan Anglo-Oriental College that later became Aligarh Muslim University.

Somebody who fought for independence from outside India, in 1915, he went on to form Indian government-in-exile in Afghanistan with the help of his Muslim friends, including revolutionary Maulana Barkatullah.

Describing it as a positive step to revive the memory of his “educationist” great grandfather, Charat Pratap Singh said Mahendra Pratap was nominated for the Nobel Peace Prize and was in the same league as Mahatma Gandhi and Subhash Chandra Bose but “his contribution to the freedom struggle and promotion of education in the region was ignored in the last 60-70 years.”

Meanwhile, Bharatiya Janata Party sources said around a lakh people are expected at the September 14 event and around 1,000 buses are being pressed into service.

Sudhir Chaudhary, vice-president of the Brij unit of the Kisan Morcha of the Bhartiya Janata Party said “Raja Mahendra Pratap was ignored by the Congress and even Rashritya Lok Dal that presents itself as a representative of Jats.” “The BJP is trying to correct the mistakes of the past by giving respect to a freedom fighter and a social reformist,” said Mr. Chaudhary, former zila panchayat president of Aligarh.

He went on to add that the PM’s visit should be seen as a flag off to the development of the region as the PM will also lay the foundation of the defence corridor. By giving affiliation to 400 colleges in Aligarh division, he said the upcoming university will reduce pressure on the Agra University. “It will provide education to all,” he underlined.

Describing it as yet another attempt of the ruling party to seek votes on name rather than work, Bijendra Singh, Samajwadi Party leader and a prominent Jat leader in the region said he feared that the BJP would use the name of a secular Jat icon, who donated everything to the marginalised, to divide people. Mr. Singh who has represented Iglas Assembly constituency, where the university is being built, three times, said the project to seek Jat votes was envisioned during Iglas by-poll in 2019. “We demand adequate compensation to farmers whose land has been acquired for the university according to the Land Acquisition Act 2013 and a job to their kin in the university,” said Mr. Singh, adding the party would protest on September 14.

Mr. Singh further said Jat farmers knew how to distinguish between honour and political reality and the move would not help BJP in the region. He reminded Mahendra Pratap lost the Lok Sabha election from Aligarh in 1967.

Local media reports suggest Bharatiya Janata Party has been using Mahendra Pratap to polarise voters by claiming that AMU didn’t give Mahendra Pratap, who leased some of his lands to the institution, his due.

The local BJP MP also invoked his name during the Jinnah portrait row. After the announcement of the PM’s visit, a section of the local media carried stories that suggest Mahendra Pratap cautioned Mahatma Gandhi against Mohammed Ali Jinnah in 1930.

Manvendra Pundhir, professor of history at AMU said there is no proof of this in the public domain. “There is no mention of it in Mahendra Pratap’s autobiography. Those making a claim should bring evidence,” said Prof. Pundhir, adding not much quality research has been done on Mahendra Pratap’s life.

Like Nehru and Bose, Prof. Pundhir said Mahendra Pratap was inspired by the Bolshevik revolution and worked with the Germans and the Japanese during the First and Second World War and perhaps that could be the reason that his contribution was not celebrated enough after independence.

Describing him as a “secular force”, Mr. Charat Pratap said his great grandfather who spoke of Prem Dharam [religion of love] could not be used as a divisive figure. “He was a kind of person who would say namaz in the morning, live a Buddhist life in the noon and listen to Ram and Krishna bhajans in the evening. We have had some issues with the university administration regarding the land donated by our family and I do feel that the University hasn’t done enough to preserve his memory but we will not do anything that is against the ethos of Raja Mahendra Pratap.”

He said the communication with Mahatma Gandhi on Jinnah seemed unlikely as during the period he was not in India and his every move had been closely watched by the colonial government.

The AMU administration maintained that they are proud of their distinguished alumnus and regularly organise events in his memory.

Rahat Abrar, former director of Urdu Academy and somebody who has written extensively on the history of Aligarh said Mahendra Pratap’s grandfather Teekam Singh and father Ghanshyam Singh were close to Sir Syed Ahmad Khan.

He reminded that Mahendra Pratap was the chief guest at MAO College’s centenary celebrations in 1977 and his portrait was put in the main hall of the university’s central library. “With the new university being named after him, he has joined the league of illustrious Aligs such as Maulana Mazhar ul Haq and Moulvi Abdul Haq after whom universities are named,” he underlined.