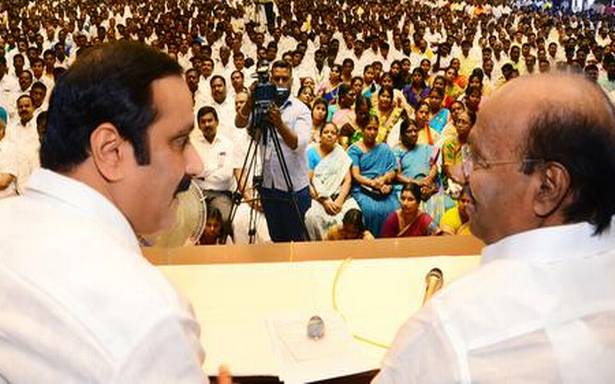 PMK founder S. Ramadoss released the party’s 14th shadow agricultural budget dwelling on 75 specific areas and over 250 suggestions on Sunday, aiming to create and develop agricultural infrastructure and agricultural education infrastructure, to achieve an agricultural growth of 6% in Tamil Nadu from a negative growth in the past.

Speaking at the launch, Dr. Ramadoss said that the total budget allocated for the agricultural budget would be Rs. 47,500 crore. “We are happy and we welcome the Governor’s address which mentions that a separate budget for Tamil Nadu will be made by the State Government. We have focussed on 75 specific areas in the reports. Every year [in the shadow budget], we give importance to one aspect of agriculture and this year we have focussed on agricultural education,” he said.

PMK youthwing leader Anbumani Ramadoss said that the budget that will be created with the inputs of 100 bureaucrats by the State Government has been prepared by the PMK.

“Throughout India, we stand second in production of vegetables but we export only 1-2% because we lack cold storages. Almost 30% goes to waste due to this. If we are in power, we will create cold storages. To safeguard the grains produced, we will have to create massive storages. We need to create infrastructure for food processing, value-addition industries and transportation,” said Mr. Anbumani, adding, “For this year, the budget is for ₹47,500 crore, of which ₹12,100 crore will be distributed as subsidy and ₹15,000 crore for water irrigation projects. The State Government has only allotted ₹11, 982 crore for the agricultural budget.”

“[Former Chief Minister] Edappadi K Palaniswami announced the Delta region as ‘Protected Special Agricultural Zone’ and we did extensive campaigns. It is a big achievement. Ariyalur district should also be included as a part of the zone along with Kallanai region in Tiruchi. Former CM EPS also waived farmer’s loans. We hope the DMK will also implement these ideas,” he said, adding, “We will function as a responsible Opposition party — we will welcome the government if they implement good schemes and oppose the Government if they pursue anti-people policies.”