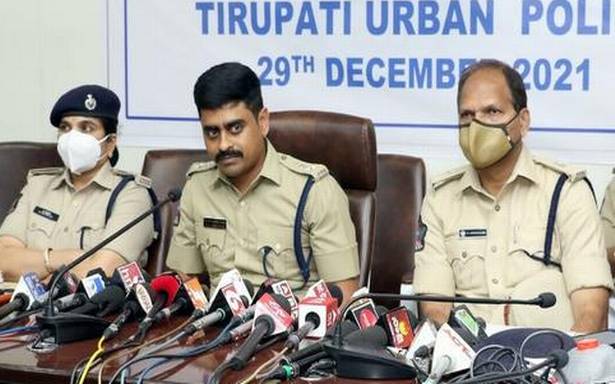 The year 2021 saw an increase in registration of cases of crime against women and children in Tirupati Urban police district, which the department attributes to the people’s heightened awareness and the department’s improved accessibility through ‘Dial 100’ and DISHA App.

“We acted on time to nab six culprits and block 34 links/videos from the web”, said Ch. Venkata Appala Naidu, Superintendent of Police (Tirupati Urban), while revealing the year’s performance on Wednesday. The Alipiri police also removed a social media personality’s tampered videos, which were allegedly circulated for pecuniary benefits. The city also witnessed two cases of missing babies from Chhattisgarh and Karnataka, who were rescued based on technical inputs.

The Alipiri police nabbed a gang of eight persons in July for illegally converting international VoIP calls using SIM boxes. Another crime having international ramifications was busted when six persons of foreign origin, including two from China and four from Myanmar, were arrested for unauthorised stay. “About 244 foreigners are officially staying in Tirupati Urban now, 214 of them from China,” Mr. Naidu said.

More than ensuring traffic discipline, the e-challan helped the department rake in the moolah through hefty fines. The number of traffic violation cases doubled from 72,764 in 2020 to 1,48,247 in 2021, which includes triple riding, driving by minor, using cellphone while driving and not wearing masks.